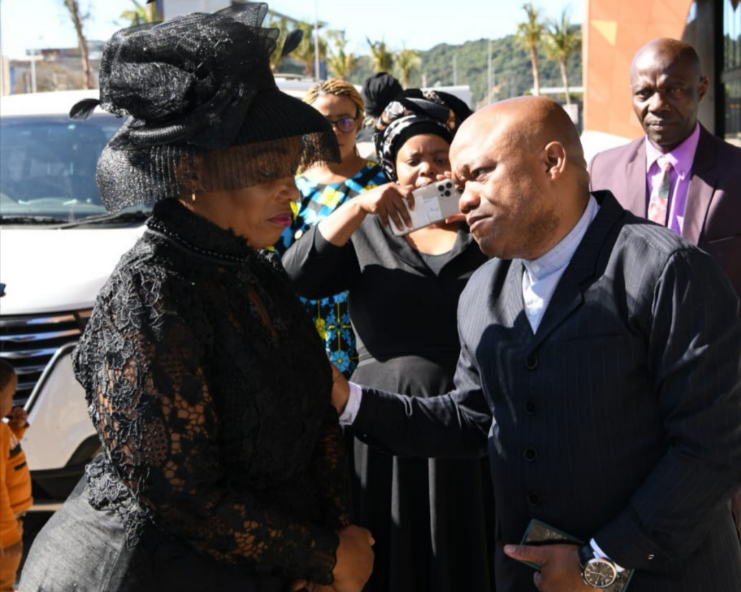 Deputy transport minister Sindisiwe Chikunga is comforted by KZN premier Sihle Zikalala at a memorial service for her son, daughter-in-law and four grandchildren, who were killed in an accident last week.
Image: Supplied

A memorial service was held on Monday at Durban’s cruise terminal for the son of deputy transport minister Sindisiwe Chikunga, who was killed in a car crash on the N11 near Ladysmith last week.

Khulekani Xaba, who was a planner at Transnet, his wife Zinhle and four children Nizenande, Mashiyamahle, Thapelo and Olwethu died in a head-on collision with a bakkie.

In his address, Zikalala said: “No words can express our pain on your loss [of] not only one member of the family but six on this now notorious stretch of the N11.

“N11 is well known for accidents. We must stop road carnage.”

Nine people sustained minor to moderate injuries when an 87-year-old man crashed his vehicle through a butchery in Morningside, Durban, on Tuesday.
News
1 month ago

He said the government at a provincial and national level must work to make the N11 safer “through a number of interventions”.

“He would take his children to different schools himself and his wife to work. He loved his children,” he said.

Abraham described Xaba “as naturally kind” and said he was a person who was always willing to help.