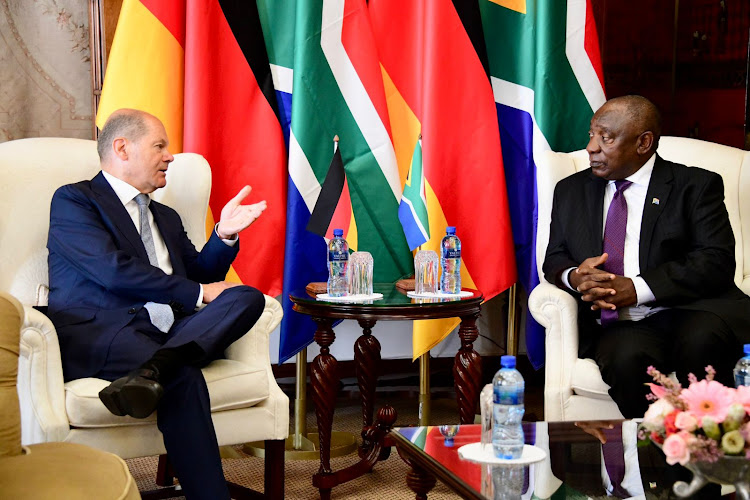 The war in Ukraine appears to have been at the top of the agenda during President Cyril Ramaphosa and German Chencellor Olaf Scholz’s meeting on Tuesday, with Scholz accepting Ramaphosa’s explanation about why SA decided to abstain during the UN General Assembly vote.

Speaking during a media briefing at the Union Buildings in Pretoria on Tuesday, Ramaphosa was asked if SA had changed its position and why it was not supporting sanctions against Russia.

Ramaphosa said: “Chancellor Scholz and I had a few good minutes in our tête-à-tête and we talked about a number of issues, including the conflict between Russia and Ukraine. I was quiet heartened by the explanation he gave with regards to the stance Germany has taken.”

Ramaphosa said Scholz understands the positions taken by other countries.

“There are number of countries which in the majority supported the stance taken at the UN General Assembly. He understands the reasons each country has articulated for voting in favour of Russia and for abstaining.

“The position we took was that we would like negotiations, dialogue and engagement with Russia on this matter or between the two countries. We have been fairly consistent on that because we know very well the value of dialogue, negotiation and collaboration as in many ways it gave birth to our own democracy.”

The 193-member United Nations General Assembly began meeting on the crisis in Ukraine on Monday ahead of a vote this week to isolate Russia by ...
News
5 months ago

Ramaphosa said SA is in the position it is today because of dialogue, negotiation and collaboration between belligerent entities.

“We were pitted against each other by the apartheid government regime. It was only dialogue and negotiation that brought an end to the conflict, and that is the position we have articulated.”

He said: “It is this position I believe should be the order of the day. It is for that reason we say we would like this conflict to end and one of the best ways is calling for the cessation of hostilities, and that should be achieved through negotiation. Once there is a cease fire, we will be able to get the two belligerent parties into serious negotiations.”

He said the sanctions imposed against SA  during apartheid were different.

“What succeeded was negotiations. Negotiations brought an end to the apartheid nightmare and conflict, and Chancellor Scholz understands the position we have taken.”

Scholz said it was important to discuss the global repercussions of the war.

“I believe it was a good decision for the G20 to invite Zelenskyy. It’s an important step and we need to talk about further steps closer the G20 summit. We decided to impose sanctions against Russia to convince them to stop the war. We have decided to stop the import of coal in Europe and Germany in autumn this year.”

He said sanctions include stopping imports of  of Russian oil.

“In the case of the EU, we are discussing this because some countries t have difficulties to solve because of infrastructure.”

Asked whether he thought African Union chair Macky Sall’s meeting with Putin and Zelenskyy will assist to bring the two leaders to the negotiation table, Ramaphosa said: “It was decided Sall should travel to Russia, but we also said he must travel to Ukraine so it is not a one-sided visit.”

Ramaphosa said the visit is important because “Africa has a role to play because it has access to both leaders to foster the process of dialogue and negotiation. ”