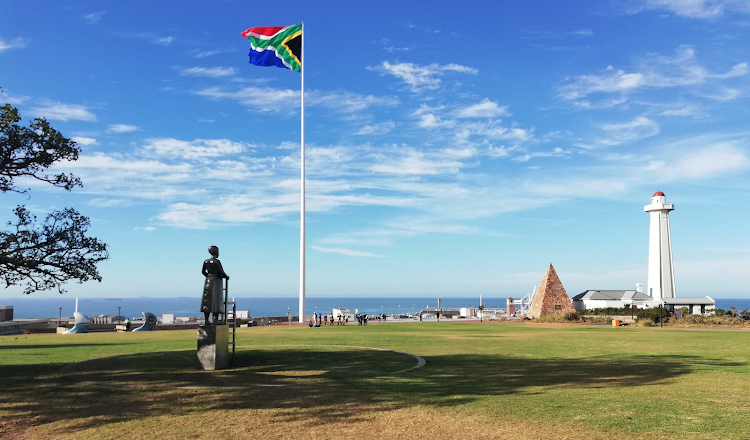 SA's tallest flying flag in the Eastern Cape costs about R200,000 a year to maintain.

Mandela Bay Development Agency spokesperson Luvuyo Bangazi said maintenance of the 60m flagpole at Donkin Reserve was minimal except at times when the motor was under strain due to notoriously high winds in Gqeberha.

The maintenance costs include major repairs.

“Often the flag is down due to tears, but we fix them quickly,” he said.

The estimated cost of the flag and flagpole at the time of construction in 2009 was just under R2m.

Flags have become a heated topic of conversation after it was revealed that sport, arts and culture minister Nathi Mthethwa planned to spend R22m on a 100m-high “monumental” flag. The ministry on Thursday announced that Mthethwa had directed his department to review the project after widespread criticism.

The flagpole at Donkin Reserve set a record in the country when it was extended in height from 45m to 60m.

James Combley of Neptune Engineering told SowetanLIVE's sister publication TimesLIVE the cost of the extended steelwork alone, which he supplied in 2009, was now about R300,000.

“It has doubled from 2009. This is due to inflation and the price increase of steel,” he said.

Bangazi explained the flag was part of a larger environmental upgrade to Route 67.

“This contemporary art-heritage route creatively traces the 67 years of struggle by Madiba. Along the route you will find a collection of quotes, sculptures and artworks, each giving a creative expression for each of those years. The culmination and highlight are where the colonial past meets a democratic state. The Donkin pyramid is symbol of the past, but the big flag that overshadows it is a symbol of democracy.

“Side by side they present what is possible in a new dispensation. Though the throngs of UK and other European tourists come to visit the Donkin, they walk away with memories of the Donkin flag and an experience of Route 67 with a sculpture of Madiba standing under the flag,” he said.

The pre-2010 World Cup project was to create tourism assets to leverage and build on.

“It worked. Many teams, visitors, TV shows and so on went up the Donkin during 2009/2010 before selfie frames were popular,” Bangazi said.