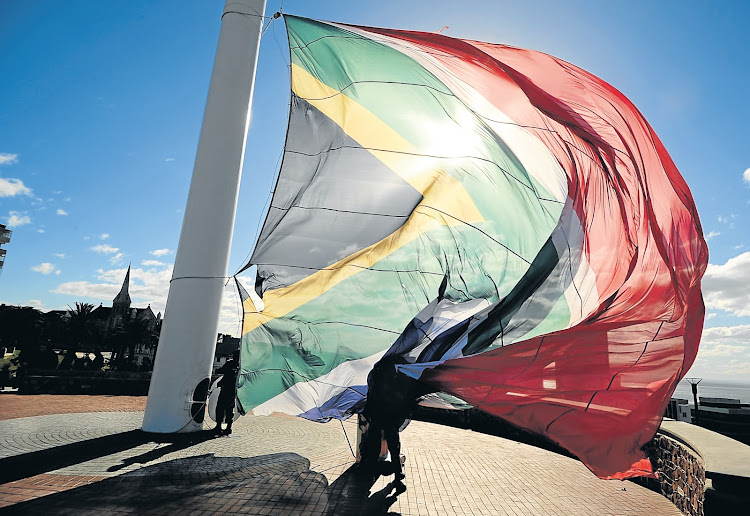 The ministry of sport, arts and culture plans to spend R22m on a 'monumental' flag. File photo.
Image: THE HERALD/MIKE HOLMES

The presidency has acknowledged that exorbitant expenditure on a national flag project could leave a bitter taste for many when considered against the backdrop of poverty.

Minister in the presidency Mondli Gungubele on Thursday said the project has had unintended consequences.

“Of course we also acknowledge the fact that in terms of the figure and how a flag can be misunderstood against the background of poverty, it stands to create unintended consequences,” he said.

Gungubele told TimesLIVE that the cabinet approved the project in principle but it never dealt with its costs as the cabinet does not consider finances when dealing with policies.

“A cabinet resolution specifically said we should separate monies from the principle of approving the flag,” he said.

But the flag's message was critical in the sense that it would sustain the memorisation of the history of the country, and promote tourism and a number of other spin-offs, he added.

Sport, arts and culture minister Nathi Mthethwa's plan to spend R22m on a 100m-high “monumental” flag is under review.
News
2 months ago

The sport, arts and culture ministry announced on Thursday that the plan to spend R22m on a 100m-high monumental flag will be reviewed. The ministry said this was at the instruction of minister Nathi Mthethwa after widespread criticism of the proposed project in the past few days.

“Over the past few days the minister has followed and taken note of public discourse that has unfolded in respect of the envisaged monumental flag. The diversity of voices around this important heritage project are a welcome celebration of our country’s vibrant constitutional democracy and the freedoms that must be upheld beyond posterity. It also bodes well for one of the pillars of social cohesion: an active citizenry.

“In upholding this ethos and the inalienable rights of citizens to be heard, the minister has directed his department to review the process related to the monumental flag in its totality,” the ministry said in a statement.

Gungubele said they were happy that Mthethwa has “listened to South Africans and decided to review that”.

But the cabinet still supported the essence and purpose of the project.

“I insist that the purpose of the flag is highly supported by the cabinet,” he said.