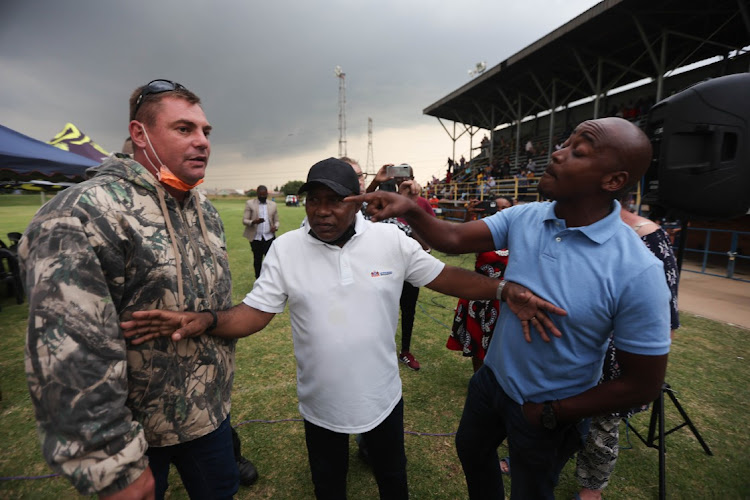 Irate parents argued among themselves when they gathered for a meeting with Gauteng education MEC Penaza Lesufi in February at Hoerskool Jan Viljoen in Randfontein. Investigators have found there was a third party involved in the initial brawl between pupils.
Image: Alaister Russell

Gauteng education MEC Panyaza Lesufi on Tuesday received a report-back from investigators who were tasked to probe racism and sexual assault allegations at Hoërskool Jan Viljoen in Randfontein.

The school had called in special security services to investigate the violence which occurred at the school earlier this year, which unearthed allegations of racism, lack of transformation and sexual assault allegations.

At the time, acting Gauteng education spokesperson Oupa Bodibe said a member of staff — not a teacher — had been suspended after allegations of sexual harassment that came to light.

Summarising the findings, lead investigator Luke Enslin said about the fighting incident: “We discovered that things were not right at the school.” 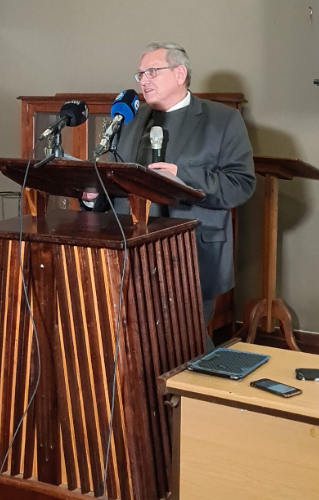 He said they found other pupils who had been involved in the brawl whom they have not yet identified but that the fight also involved “third parties”.

The recommendations also involved the establishing of a grievance committee to handle events before they escalate and that there be diversity training implemented at the school.

The school made headlines in February when racism allegations surfaced. This was after several videos of a brawl between black and white pupils went viral on social media.

Video footage of a fight, between a male and a female pupil, was shared on social media and WhatsApp messages containing racial slurs were also shared. This resulted in a clash between parents.

Heading back to the school on Tuesday, Lesufi said  he would not comment until he had seen both the investigation report, which he received three weeks ago, and a report by the SA Human Rights Commission which also probed the incident.

He called the report “a work in progress”.

Lesufi met parents at the school. In February, he was late to the parents' meeting and when he arrived a huge storm prevented the meeting from continuing.

On Tuesday, parents waiting on the field were again rained out but they were redirected to a hall for the meeting  Many had already left and the hall was sparse.

Lesufi said the report into sexual harassment by a member of staff will be given to the school governing body but not to parents or media as it contains names of victims and the alleged perpetrator.

Enslin said there will be more reports, with a final report being sent to Lesufi's office which will then make recommendations.

He said learners transgressed different laws at different times ... and third parties had escalated or fanned the flames.

Addressing the parents, Enslin said the diversity training will help people from different backgrounds understand each other. He reminded parents that this was an investigation in progress.