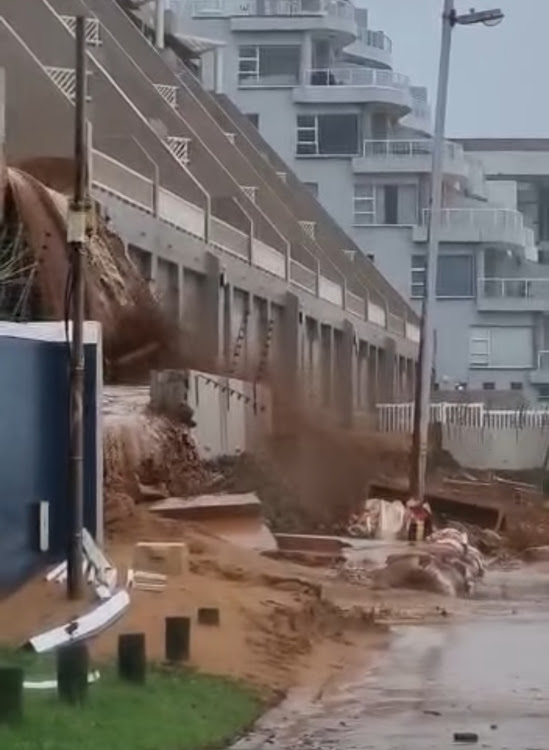 Umdloti residents were forced to evacuate on Monday when their apartment building was hit by a mudslide.
Image: supplied

Residents living in an apartment building on North Beach Road in Umdloti, north of Durban, were evacuating due to flooding on Monday afternoon.

The Isikulu building was engulfed by mud and cars were trapped in the parking lot.

“The village is working on finding accommodation for these residents with those that have not been affected yet. We are also trying to deal with blockages in the area,” he said.

Residents from a block of flats in Umdloti are evacuating due to flooding.
Video: supplied pic.twitter.com/trZacKw6QQ

Meanwhile, the city issued a “high flood alert” warning. In a statement on Monday, the municipality said heavy rainfall had resulted in flooding of certain roads and rising water levels.

“The water level in the river between Mega City in Umlazi and Lamontville is rising and communities along this river are cautioned to relocate to a safer place. Rivers in Amawoti and Quarry Heights are also overflowing, and residents are advised to move to alternative accommodation,” it said.

The Amanzimtoti area has also been affected. The city’s roads and stormwater teams are in the area unblocking drains to minimise flooding.

“The downpour has resulted in two fatalities — one from KwaMashu’s ward 47 and the other in Umlazi’s ward 87. The disaster management and emergency services teams are on the ground conducting citywide assessments on the impact of the wet weather on vulnerable residents,” said municipal spokesperson Msawakhe Mayisela.

Residents are urged to adhere to the following safety measures:

According to the SA Weather Service, rain is expected to continue throughout Monday and Tuesday.