ConCourt hopeful Unterhalter admits error: 'I should have recused myself' 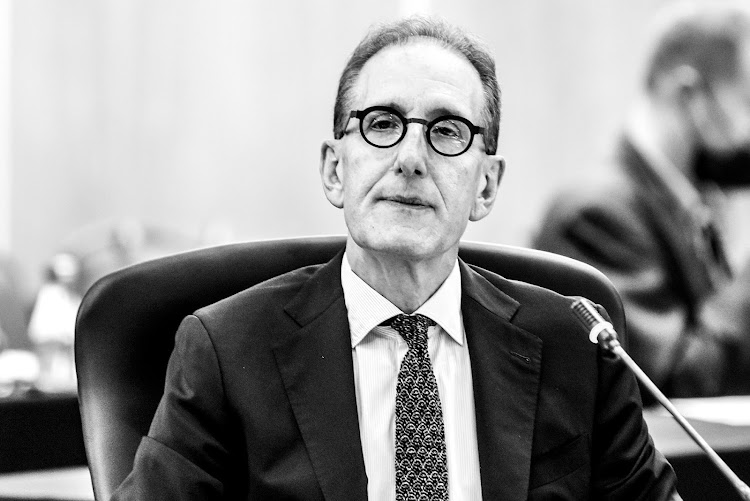 Judge David Unterhalter before the Judicial Service Commission in Johannesburg on Tuesday.
Image: Office of the Chief Justice

The question came during the interviews by the Judicial Service Commission after commissioner Mvuzo Notyesi asked Unterhalter whether it was acceptable for a judge to sit on appeal on the same case before the SCA and the Constitutional Court.

Unterhalter replied it would not be correct.

I can only say that it was an error. I did not recall I had sat on the petition. Commissioners will know that many many of these petitions come and one sits in them in their many numbers

The Judicial Service Commission interviewed five candidates for two vacant positions at the Constitutional Court on Tuesday April 5 2022. Considerations of race and gender loom over the recommendation that the commission will put forward, and candidates were not shy to address this. #JSC #JudicicialServiceCommission #ConstitutionalCourt #ChiefZondo Subscribe to TimesLIVE Video here: https://www.youtube.com/user/TimesLive Comment Moderation Policy: https://www.timeslive.co.za/comments/

Notyesi then produced two orders —  one issued on August 8 last year in the SCA where Unterhalter —  who was acting judge of appeal — and judge of appeal Ratanang Mocumie dismissed a special leave to appeal.

“Shortly thereafter this year, you sit in the (Constitutional Court) in the full court comprising of justices (Jody) Kollapen, (Mbuyiseli) Madlanga, (Stevan) Majiedt, (Rammaka) Mathopo, (Nonkosi) Mhlantla and others, you sit in that bench for the same matter, and you dismiss the leave to appeal by these parties.

“That is a serious concern to me,” Notyesi said.

Unterhalter said he would have to look at the two cases and see where the problem arose.

The commission adjourned for 30 minutes for Unterhalter to check the records of these orders.

After the adjournment, Unterhalter said the document provided to him indicated a petition served before the SCA and he together with Mocumie sat on that petition.

“I have seen the document which evidences the fact that I sat in the petition in the Mogale City matter. We dismissed the application for special leave.”

Unterhalter said there was then an application brought by the disappointed applicant before the Constitutional Court.

“I can only say that it was an error. I did not recall I had sat on the petition. Commissioners will know that many of these petitions come and one sits in them in their many numbers,” said Unterhalter.

Unterhalter said the application to the Constitutional Court  did not,  in the body of the application, actually reference him or his name, nor Mocumie’s.

“I did not see I had sat  [in the petition]. None of my colleagues at the Constitutional Court noted this fact nor the clerks that assisted in the preparation of their work.”

He said he should consequently have recused himself before the Constitutional Court.

When asked what has changed since he was last interviewed for a vacancy in October last year, Unterhalter said he now has had the privilege of acting for a term in the Constitutional Court.

“Because since that is the court that I aspire to sit in on a permanent basis, I think that has been a very helpful experience both in understanding how the court works and engaging in the important work that it does.

“That is a relevant factor that is additive to things that I have already placed before the commission,” Unterhalter said.

He is one of five candidates being interviewed by the JSC for the two vacant positions in the Constitutional Court.

The Judicial Service Commission will interview candidates for the two vacant positions at the Constitutional Court on Tuesday. The appointments will ...
News
4 months ago

ConCourt Interviews | ‘I am an African,’ says advocate Alan Dodson

Advocate Alan Dodson, 61, would not be drawn into justifying how his appointment as a Constitutional Court judge would relate to transformation.
News
4 months ago

Public protector Busisiwe Mkhwebane says the allegation that minister Pravin Gordhan abused his position to influence the appointment of his friend ...
News
4 months ago
Next Article