Factionalism challenges in the ANC are being dealt with, says Ramaphosa 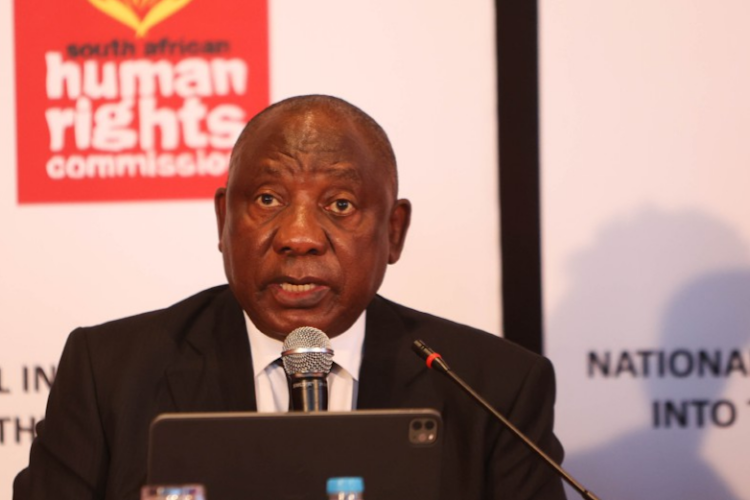 ANC president Cyril Ramaphosa has told the SA Human Rights Commission (SAHRC) that the use of state resources to fight factional battles within the party should never happen again.

“These are some of the challenges and problems that we are dealing with through our process of renewing in the party and making sure that the party is properly repositioned to a point to where we do not ever use state resources to fight internal battles within the governing party,” he said.

Ramaphosa was responding to a question put to him by commissioner Buang Jones, who asked him about the underlying issues that resulted in the July unrest.

He replied: “What is suggested by the Africa Report [expert panel report] is that factionalism within the governing party has had an impact on a number of things that happened in the state and that is what has been put forward.

“The Mufamadi report also refers to factionalism within the state security agency apparatus.”

“These are challenges we have to deal with and I speak now with another hat, as the leader of the governing party.”

Ramaphosa sounded optimistic about the changes to come.

“I see positive signs emerging and of course processes such as the Zondo commission have helped a great deal to shine a light on some of these maladies and malfeasance.

“So I think rather than being more negatively disposed, we are beginning to move towards a more positive [direction] where we will be able to say factionalism is being eradicated in the state security apparatus. State security will now act in the interest of the people.”

Addressing the media after his testimony, Ramaphosa said: “Of course there will be cleavages of resistance and wanting to go back, but we are moving ahead and we will succeed. The cohort in the ANC want to see the renewal and rebuilding of the party ... and that is what I rely on.

“At a state level, we are rebuilding the state. We went really down to the depths of despair but we will emerge with a stronger state.”

The ANC factions have affected trade union federation Saftu and divided it down the middle as the turmoil relating to Zwelinzima Vavi rages on.
News
5 months ago

ANC suspect arson behind fire at its Mpumalanga offices

An arsonist is believed to have been behind the blaze that engulfed the ANC provincial headquarters in Mpumalanga on Thursday morning.
News
5 months ago

The Umkhonto we Sizwe MKMVA member who has been arrested for allegedly burning ANC provincial offices in Mpumalanga had been a disgruntled man who ...
News
5 months ago
Next Article