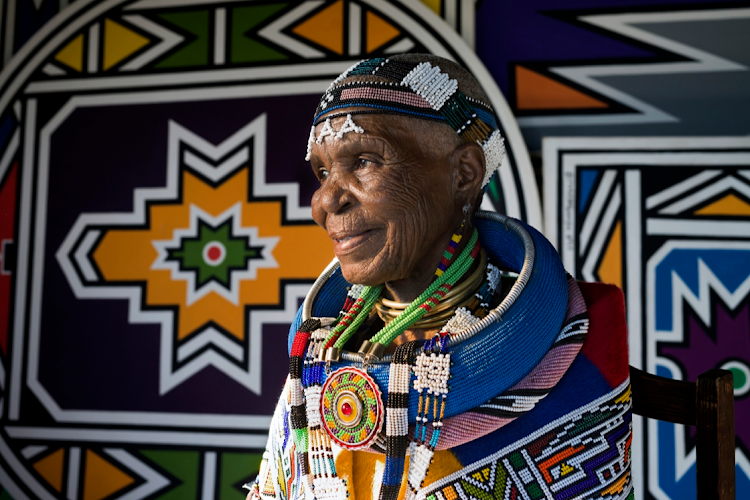 Arrests are yet to be made two weeks after Dr Esther Mahlangu was attacked and robbed in her home on March 19. File photo.
Image: Clint Strydom

Mpumalanga police on Friday offered a R50,000 reward for information about the robbery at the home of renowned Ndebele artist Esther Mahlangu.

The 87-year-old was robbed and attacked at her home in Weltevrede near Siyabuswa on Saturday March 19.

Police spokesperson Brig Selvy Mohlala said a reward was being offered to anyone who could provide information leading to the culprit being arrested.

Mahlangu's attack shocked the country as police revealed how she had been punched in the face, bound with a cable and strangled until losing consciousness during the house invasion, which occurred at around 3pm.

“The suspect then searched her bedroom and took a safe containing a 7.65mm pistol, as well as an undisclosed amount of cash and bundles of keys and fled the scene. She was left helpless and sustained some injuries on her face but was later found by her granddaughter who alerted neighbours,” Mohlala said.

“Anyone with information that can lead to the arrest of the suspect and the recovery of the stolen items as well as subsequent conviction of the suspect is urged to come forth or call Col Ernest Maoka at 082-318-9843. All received information will be treated as confidential.”

Mpumalanga premier Refilwe Mtshweni-Tsipane has committed to beefing up security at the home of renowned Ndebele artist Esther Mahlangu, who was ...
News
3 months ago

Renowned Ndebele artist Esther Mahlangu bought a pistol which she kept in a safe more than two decades ago to protect herself from crime which has ...
News
3 months ago
Next Article