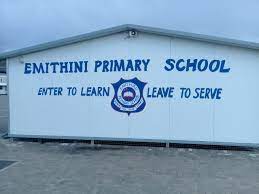 A maths teacher at Emithini Primary School in Kraaifontein, Cape Town, has been fired for sexually assaulting a 13-year-old grade 7 girl.
Image: Supplied

A talk about gender-based violence at a Cape Town primary school left a grade 7 girl in tears as she told a teacher what had happened to her eight months earlier.

This week, a maths teacher at Emithini Primary School in Kraaifontein was fired for sexually assaulting the girl by touching her thigh and lifting her skirt.

The pupil told teacher Nonthandlo Zilumblu the assault happened in the computer room and that she stopped Lubanga before it went any further.

The girl cried and shook as she spoke, Zilumblu told the hearing, and she appeared to be devastated.

Lubanga, who started his first teaching job at Emithini Primary in 2019, denied the assault and told Singh-Bhoopchand it was unlikely he would do something like this when his girlfriend is also a teacher at the school.

“In response to a question as to why the learner would fabricate the incident, his response was that many learners considered him attractive. Other than that, he could find no reason,” said the commissioner.

Singh-Bhoopchand said the pupil had been an impressive witness. “She was clear and consistent and did not deviate from her version. There does not appear to be any plausible reason why she would fabricate these allegations against an educator whom she said she had liked.

"[Lubanga's] attempt to provide a possible reason is rejected. He made a bald statement that many learners are attracted to him, without providing any casual nexus between his statement and the allegations.

“There can be no innocent explanation for lifting the learner’s skirt and for touching her thigh in a manner that made her uncomfortable. The employee intentionally violated the learner’s bodily integrity. I find that the acts are sexual in nature and accordingly find the employee guilty of sexual assault.”

Singh-Bhoopchand said the girl told another teacher about the assault immediately after it happened but no action was taken.

“It is unfortunate that she was let down by the educator to whom she reported the incident. I have been informed that [the teacher] is being disciplined for her failure to act.”

The DA has given fired Western Cape community safety MEC Albert Fritz 24 hours to provide reasons why he should not be suspended from party ...
News
3 months ago

More than 3,000 sexual offences were recorded in Gauteng in the third quarter of the 2021/22 financial year.
News
3 months ago

Fake businessman rapist who taunted his victims on Facebook is jailed

A serial rapist who recorded one of the attacks and brazenly posted the video on Facebook, taunting his victims to lay criminal cases against him, ...
News
4 months ago
Next Article