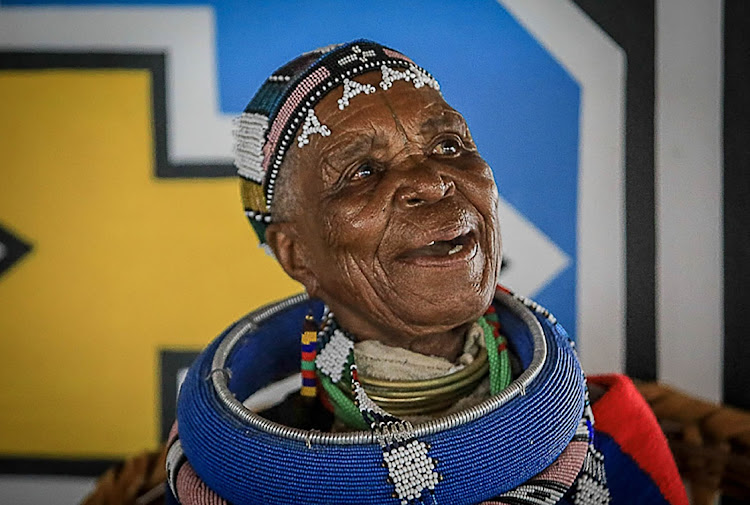 The Mpumalanga police have launched a manhunt after award-winning Ndebele artist and icon Esther Mahlangu, 87, was attacked and robbed of her firearm, personal belongings and cash.

According to spokesperson of the Mpumalanga police brigadier Selvy Mohlala, the incident happened on Friday in Siyabuswa, where Mahlangu lives .

“Details of the said robbery indicate that on the said day the old woman, who was alone at the time, was preparing to take a nap where she reportedly locked all doors of her house. Strangely, she noticed a man unknown to her inside the house. The man then allegedly grabbed her and punched her in the face before tying both her hands with a cable and tried to strangle her until she reportedly became unconscious.

“The old lady reported that she cannot recall what happened thereafter. However, when she regained her consciousness, she realised that her house was ransacked and her firearm as well as money were stolen from the safe.” said Mohlala.

Mohlala said Mahlangu sustained injuries and bruises on her face and she reported the incident to the police.

“She sustained some bruises on her face and the matter was reported to the police at Siyabuswa, whereby a house robbery case was opened, hence the manhunt. The suspect is still at large and police urge anyone with information on the whereabouts of the suspect to call the Crime Stop number on 08600 10111 or send information via MYSAPSAPP. All received information will be treated as confidential and callers may opt to remain anonymous.” said Mohlala.

Mpumalanga police commissioner Lt Gen Semakaleng Manamenla has strongly condemned the incident and called for a swift arrest of the suspects.

“It is shameful to hear that our senior citizens are now being targeted by heartless criminals who show no mercy at all. On Sunday (March 20 2022), we had an incident of this nature where an old male pensioner was strangled to death in Delmas. This cannot be allowed to continue unabated. The person who committed this evil act against one of the country's asset must be swiftly hunted down and be brought to book,” said Manamela.

An unlikely bond has been formed between Carol Bouwer and Esther Mahlangu thanks to their love for handbags.
Entertainment
1 year ago

Master beadwork maker inspires others to take charge of their lives

Master beadwork maker, painter and remarkable cultural entrepreneur and educator Sophie Msoziswa Mahlangu showed the youngsters a thing or two when ...
SebenzaLIVE
1 year ago
Next Article