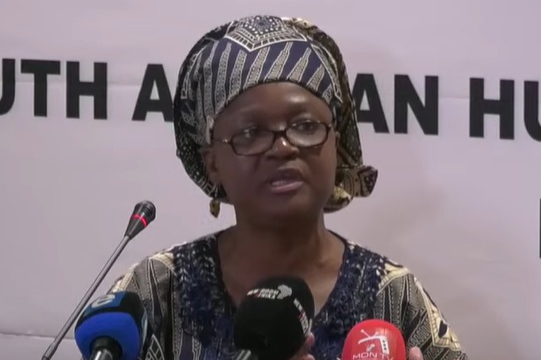 Jamela Robertson speaks at the SA Human Rights Commission hearing into racism and discrimination in the advertising industry.
Image: Supplied

Robertson said the advertising, film and other modes of communication follow the notions of patriarchy.

Robertson was testifying at the SA Human Rights Commission’s (SAHRC) hearings on racism in the advertising industry.

The five-day inquiry, which is being held in Rosebank, Johannesburg, focuses on the production chain in the advertising sector to look at ways to eliminate racism, tribalism, homophobia and sexism, among other forms of discrimination.

Robertson could not think of any examples off the top of her head but said adverts which used women in a suggestive tone to sell cars and other items were examples of stereotyping women.

“In these adverts, you find that men are portrayed as strong. They can lift up anything, while the home and cleaning products are the women's terrain.”

Robertson said there was no straight answer on whether advertisements were a mirror of society or whether society follows what they see in adverts.

The commission, described as the SAHRC's “sister institution”, had made “a lot” of recommendations for transformation to the private and public sector. However, Robertson said there was resistance to implementing the recommendations.

The commission believes that for the advertising industry to transform, self-regulation needs to be scrapped.

The SA Human Rights Commission is holding interviews into allegations of racism in advertising.
News
3 months ago

SA will never be able to stem out racism and other forms of discrimination within the country’s advertising sector if a punitive approach is not ...
News
3 months ago
Next Article