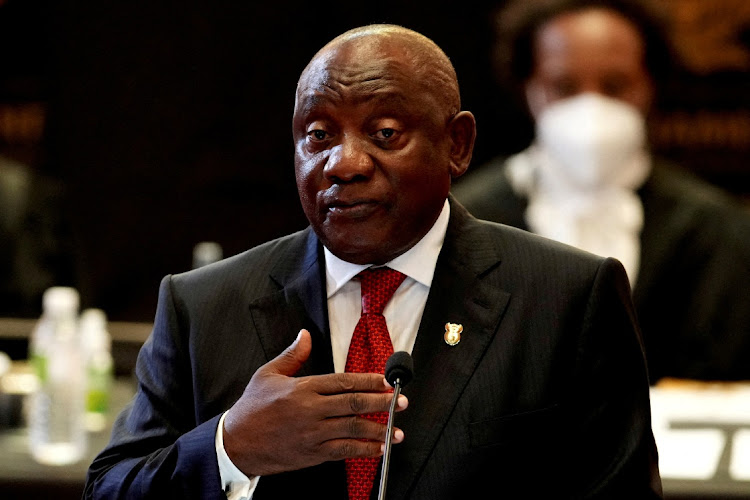 President Cyril Ramaphosa has slammed the UN Security Council (UNSC) saying the conflict in Ukraine has demonstrated “there is a tendency for the most powerful countries to use their positions as permanent UNSC members to serve their national interests”.

“It demonstrates the weaknesses in the structure and practises and the architecture of the UN. The composition of the UNSC, in particular, does not reflect the realities of the global landscape.

“That a continent of 1.3-billion people does not have a significant voice in the security council is of great concern to the citizens of this continent,” he said.

He was answering questions in the National Assembly on Thursday on issues including SA's decision to abstain during the recent UN General Assembly vote to condemn Russia for invading Ukraine.

“There is a tendency for the most powerful countries to use their positions as permanent UNSC members to serve their national interests, rather than the global interest of peace and stability.

“There is a need for the security council to be overhauled so that there is equitable representation and a more inclusive mechanism for resolving international disputes.”

The non-aligned movement (NAM) should be revitalised to ensure that countries which are not part of the “hegemonic contest between the big powers” can work together to build peace across the globe.

“We align ourselves by the calls led by the UN secretary-general for de-escalation, dialogue and the return to diplomacy.”

SA stands ready to support multilateral efforts to end the conflict and achieve peace in the region.

“The conflict in Ukraine is a matter of global concern. The international community needs to work together to achieve a cessation of hostilities and prevent further loss of life and displacement of citizens and civilians of Ukraine.

“It needs to support dialogue for a lasting and meaningful peace which ensures the security and stability of all nations.

“As a country we are committed to the articles of the UN charter, including the principle that all members settle their international disputes by peaceful means. We support the principle that members should refrain from force against the territorial and political independence of other states.

“That is why at the UN General Assembly emergency special session SA urged all sides to uphold international law, including humanitarian and human rights law as well as the principles of the UN charter, including sovereignty.”

While there are people in SA and elsewhere that want the country to adopt a more adversarial stance, “our position seeks to contribute to the creation of conditions that make the achievement of a durable resolution of the conflict possible”.

Through this approach, SA was able to make its voice heard, not only publicly, but also to the parties involved in the conflict.

“And by doing so, as we talk to them, as we exchange views and interact with them, we bring our influence to bear on dialogue, mediation and negotiation, which has always stood us in good stead as a nation.”

‘No amount of condemnation can end the war’: Mabuza on Ukraine crisis

President Cyril Ramaphosa may not have plans to travel to Russia yet, but he will be engaging world leaders to explain why SA decided to abstain ...
News
3 months ago

SA’s approach was informed by analysis and the causes of the conflict, which include a view shared by scholars, politicians and others on international relations, that “the war could have been avoided if Nato had heeded the warnings from among its own leaders and officials over the years that its eastward expansion would lead to greater, not less, instability in the region.

“This was based on agreements reached in the past among various parties.”

While it was important to understand and articulate the causes of the conflict and advocate for peace-building measures, “we cannot condone the use of force or violation of international law. We need to recognise that coercive measures such as sanctions outside the legal prescripts of the UN may serve to prolong and intensify the conflict.”

SA is concerned about the impact of the conflict on its economy through financial markets and inflation in food and fuel prices.

As a small and open economy with significant debt levels, SA had to reduce its vulnerability to external shocks through improved macroeconomic stability.

“We have many strengths, even as a small economy country, such as a highly developed and world capitalised financial and banking sector that adheres to internationally recognised frameworks. The depth of local markets reduces our vulnerability to foreign currency denominated debts.”

SA also benefits from an independent central bank, a floating exchange rate regime and prudent capital controls, he said, adding that these strengths will be complemented by the work under way to stabilise debt and reduce the deficit.

“The best way to protect our economy and welfare of our people is to proceed with the implementation of the economic reconstruction and recovery plan. The conflict in Ukraine demonstrates the need for a multilateral approach to issues of peace and security.”

President Cyril Ramaphosa has called for mediation and engagement to end the war unfolding between Russia and Ukraine which is threatening to lead to ...
News
4 months ago

SA has not been informed of its citizens requiring evacuation from either Russia or Ukraine, defence and military veterans minister Thandi Modise ...
News
4 months ago
Next Article