The statue of Louis Botha which stands outside parliament in Cape Town was vandalised on Wednesday.

The monument, which depicts Botha – the first prime minister of the Union of SA -  on a horse, was sprayed with red paint and part of Botha’s shoe was chipped off.

The incident happened around 3pm on Wednesday.

A video taken at the scene was shared with TimesLIVE by MPs who witnessed the vandalism.

The video showed three people dressed in red T-shirts hammering on the statue. 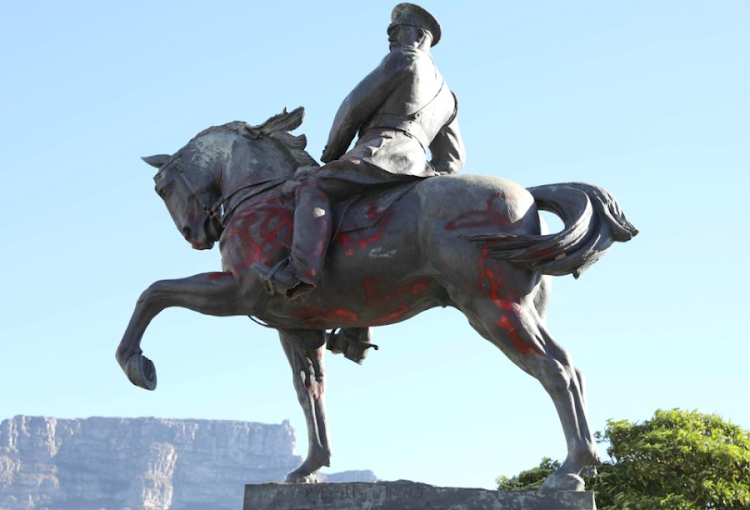 The statue of Louis Botha which stands outside parliament was defaced on Wednesday. Police have arrested two men and a woman.
Image: Esa Alexander

Parliament on Wednesday said it could not comment because the statue was outside the parliamentary precinct and was the responsibility of the city of Cape Town.

The trio has been charged with malicious damage to property, resisting arrest and assaulting the police officers and are expected to appear in court soon.

This is not the first time that the statue has been attacked.

In April 2015, the statue, which has the words “warrior‚ farmer‚ statesman" inscribed on it, was defaced with the words being scratched out with red paint.

The Botha statue has been a source of controversy for some time. In 2014, EFF leader Julius Malema said: “Louis Botha is not our hero and cannot be a hero of a democratic South Africa. He is a colonial warmonger‚ who fought for the exclusion of black and indigenous people from running their own country and affairs."

On June 16 2020, a group of Capetonians protested outside parliament, calling for the removal of the statue.

The protest had been organised by the Black People’s National Crisis Committee.