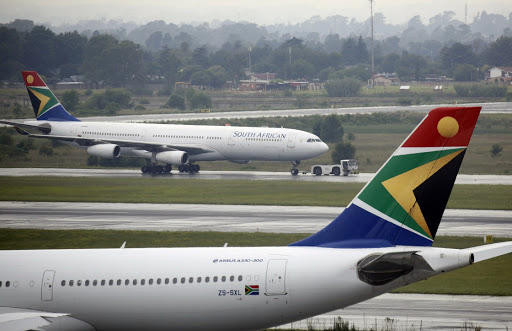 SAA exited business rescue at the end of April 2021 and took to the skies again in September. File image.
Image: Reuters

SAA has been given a new lease on life, with the government announcing it had finally concluded the sale of a 51% interest in it to private consortium Takatso.

The deal comes eight months after government had first announced the group as its preferred strategic equity partner for the airline.

The announcement in a cabinet statement that the deal had been concluded between SAA shareholder, the public enterprises department (DPE), and Takatso ends months of uncertainty about the future of the airline, which exited business rescue at the end of April and took to the skies again in September.

The statement said the “sales and purchase process” had “now been concluded and signed by the department of public enterprises and Takatso Consortium” — adding the next step involved “the approval of this transaction by various regulatory bodies”.

“The public will be updated on further developments in this regard,” it said.

It did not disclose the sales price. At the time the first announcement was made about government’s preferred strategic equity partner in June, Takatso indicated it planned to bring about R3bn in funding to the airline over three years.

The public enterprises department says it hopes to finalise an agreement with private consortium Takatso about the acquisition of a 51% interest in ...
News
4 months ago

A due diligence of SAA by Takatso had already been completed and showed no major issues, with the DPE and the consortium now having been locked in negotiations about a sale price for several months.

In a statement late on Wednesday afternoon, Takatso said it could “confirm the recent cabinet announcement that the sale and purchase process has been concluded, whereby the consortium will buy a 51% stake in SAA subject to various regulatory approvals and conditions precedent”.

“Takatso is confident that the relaunched SAA has strong growth prospects domestically, regionally and internationally, and will in due course consider partnerships with other aviation players to achieve its growth strategy,” it said.

Takatso added it was working closely with the DPE to “fulfil the conditions and ensure that the transaction is timeously concluded”.

“All matters related to the business rescue process of SAA will be resolved during this time,” the consortium said.

Discussions are taking place over restructuring the R450bn owed by Eskom, which might see part of the entity’s debt burden moving to the state.
News
4 months ago

Employees of Mango Airlines have received their outstanding July salaries.
News
9 months ago
Next Article