Mkhwebane pleads for ‘sanity to prevail’, but parliament says it will keep going with impeachment process 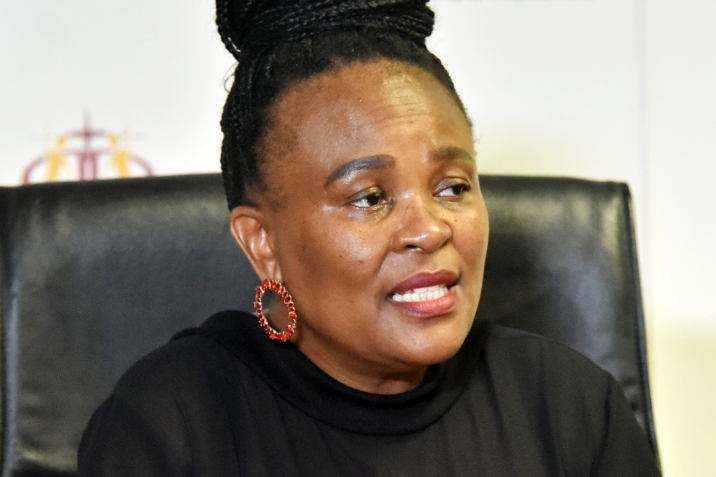 The parliamentary inquiry into public protector Busisiwe Mkhwebane’s fitness to hold office is going ahead despite her request to parliament to halt the process.

Through her lawyers, Mkhwebane wrote to National Assembly speaker Nosiviwe Mapisa-Nqakula and to the Section 194 inquiry chairperson Richard Dyantyi on Monday asking parliament to put its impeachment process on hold as she will be applying to the Constitutional Court to rescind, or reverse, the judgment that cleared the path for her possible impeachment.

They said they hoped “sanity will prevail” in this regard.

MPs represented in the inquiry rejected the request, especially as her application for a rescission has not yet been lodged.

Parliament legal advisers told the special committee that, as the legal situation stands, there was no such application lodged and, therefore, no legal impediment preventing the committee from proceeding.

Senior parliamentary legal adviser Siviwe Njikela revealed that about an hour before Tuesday’s 2pm meeting they received a second letter from Mkhwebane’s legal team persisting with the proposal that the process be put on hold pending the determination of the rescission judgment, even though this has not been filed.

Mkhwebane’s lawyers wrote to parliament on Monday asking the legislature to put on hold its impeachment process on the basis that she intended to apply to the Constitutional Court for a rescission of certain parts of its judgment against her. They indicated they would do so in 10 or 15 days.

“On the basis of that intended rescission application, she made a request to the speaker and to the committee to adopt the same attitude they had adopted when the matter was going to the Constitutional Court for appeal in the first round, that we had made a sensible decision by deciding to put the process on hold until the Constitutional Court has ruled on the issue.

“The issue she is raising is that since there is an application that will be pending soon, we should consider putting this process on hold in deference to that rescission application,” Njileka said.

Parliament’s legal advisers responded to the letter, saying there were no legal obligations to stop the process, but that was followed by a second letter on Tuesday.

Njikela said it was up to the committee to consider the correspondence and make a decision as was done previously on whether the committee would like to give that process an opportunity to unfold before proceeding with the inquiry.

In response, ANC deputy chief whip Doris Dlakude said: “Given the clarification by the legal services, ours is to proceed with the work of parliament as we are expected to and adopt the programme of the committee as well as the terms of reference so other work can start to unfold.”

The DA’s Annelie Lotriet said the committee could not accede to a request on the basis that an application will be filed.

“I think we should proceed. Looking at the agenda this afternoon, there is absolutely nothing on which we will take decisions that will have an impact on what the court found, so I propose we proceed with our meeting this afternoon,” she said.

GOOD’s Brett Herron agreed, saying while a rescission application would usually suspend the proceedings, in the absence of a real application the committee should proceed with its work.

Herron noted that according to their proposed programme, the real work starts at the end of March, which gives Mkhwebane plenty of time to bring a real application.

The ANC’s Boyce Maneli said it was important to note “the conditions under which the meeting was convened still prevail”.

“It’s clearly an intention. Anything else can still happen,” said Maneli.

Mkhwebane wants ConCourt to reverse its own judgment on her impeachment

Public protector Busisiwe Mkhwebane will be applying to the Constitutional Court to rescind, or reverse, its judgment that cleared the path for her ...
News
5 months ago

Mkhwebane wants ConCourt to reverse its own judgment on her impeachment

Public protector Busisiwe Mkhwebane will be applying to the Constitutional Court to rescind, or reverse, its judgment that cleared the path for her ...
News
5 months ago
Next Article