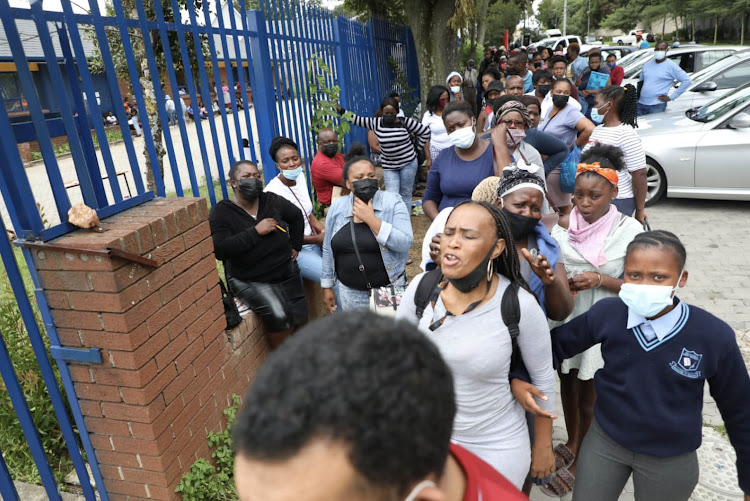 Disgruntled parents who have been queuing outside the Gauteng education department district offices in Johannesburg since the beginning of the week say the situation has forced them to abscond from work.

On Thursday, dozens of parents stood in long queues outside the district offices in Morningside, Sandton, looking to find space for their children who will be starting grade 8.

Several parents that Sowetan spoke to said they had been at the Morningside district offices since Tuesday and they were not assisted.

They keep going back.

Many of the parents in the queue were standing under umbrellas while others were seated on logs of wood and others sitting on the ground on top of blankets.

Lucia Matsheke, 39, said she came to the offices on Tuesday and was told to make use of the late online application process.

‘’I stood in the queue from 5am until 2pm. When my turn came to be assisted, I was told to apply online. I went home and applied online but I did not find the school that I want,” said Matsheke.

Cecil Baloyi, who has been standing in the long queue outside the Gauteng education department district offices in Morningside since the morning, says he is thinking of going back home. Baloyi says he doesn't think he will be assisted. @SowetanLIVE #Back2School pic.twitter.com/wL7YGQKhgj

She said she came back on Thursday and arrived at 5.4am.

“I was assisted around 11am and I was informed that my child will be placed on the waiting list because he failed grade 8 last year. I was told that I should wait for about four weeks and I will be called afterwards if there is space for my child.

“I am really not coping. I cannot go to work because my child is sitting at home doing nothing. I do not know what I will do now,” said Matsheke.

Caiphus Matjeke, 41, said he came to the offices at 6.45am on Wednesday and he was turned back because not all the documents he had were certified.

George Khosa, 45, said he had to leave work for a few hours.

“I came on Monday at 6am and was given forms to fill. On Tuesday and Wednesday, I was then told that I will be called after 10 days about which school my child will be going to.

"Today, I came here at 6am and there was no electricity, so I was not given feedback” said Khosa.

Meanwhile, in Mamelodi, east of Pretoria, dozens of parents are up in arms after the department allocated them schools outside the township, meaning their children would need transport to get to school.

"I'm so disappointed with the online system and I hope the government scraps it. I don't know what will happen to my daughter because I already bought school uniform," said frustrated parent Elizabeth Mokoena.

She said the system initially kicked her out in August and it kept on declining. In October, her daughter was placed in Lehlabile Secondary School, a few kilometres away from home.

Sylvester Mabe says he has been standing in the long queue outside the Gauteng education department district offices in Morningside since 9am today to find space for his child. Mabe says the online application system should be scrapped. @SowetanLIVE #Back2School pic.twitter.com/ufTD6jGqwJ

But when she went to submit documents at the schools, she was turned away and told to come back when the schools reopen in January.

"I went back to school on Monday but I was told to go to district office and when I got there, I was so disappointed to find out that my daughter had no space closer to home," said Mokoena.

She said she was told all the schools in Mamelodi East are full and she must choose a school in Mamelodi West.

The unemployed mother of seven said she would not be able to afford to pay R450 for her child's transport every month.

"I'm pleading with the department of education to place my daughter at the nearest school or they must come up with solution to transport kids for parents like me," said Mokoena.

Parents standing in long queues outside the Gauteng education department district offices in Morningside, Sandton, to find space for their children due to start grade 8 this year. @SowetanLIVE #Back2School pic.twitter.com/LNRyH8r8gG

Kutlwano Zwane, 15, said she was looking forward to her new school and meeting new friends but now "I'm so disappointed".

"I woke up everyday, bathed and dressed up in my school uniform [to no avail]. I see other kids going to school and it's breaking my heart," said Zwane.

Parents standing in long queues outside the Gauteng education department district offices in Morningside, Sandton, to find space for their children due to start grade 8 this year.@SowetanLIVE #Back2School pic.twitter.com/QwuNBmTKIF