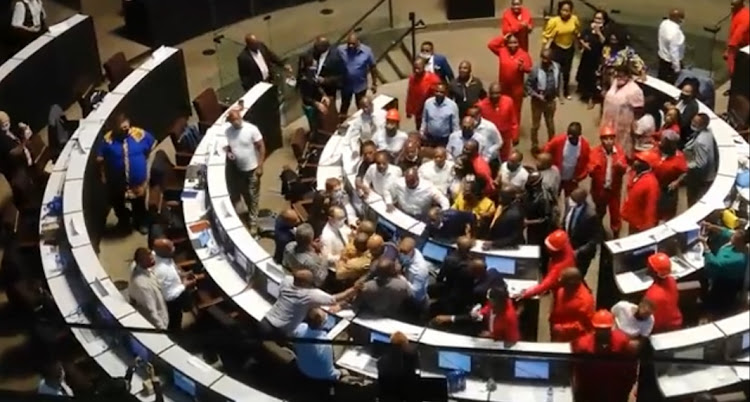 A council meeting held to elect the City of Joburg's chair of chairs descended to chaos on Thursday evening.
Image: Nomazima Nkosi

The City of Johannesburg's first council meeting has been adjourned to Tuesday after the meeting descended into chaos over how to vote for the chair of chairs.

COPE councillor Colleen Makhubele and the EFF's Nonhlanhla Radebe were both nominated for the positions.

What started as a peaceful meeting turned chaotic when councillors could not agree on how to vote for the two nominees.

One group in the council chamber called for a vote by secret ballot while the other group wanted to vote by a show of hands.

ANC councillors clashed with members of the DA as the ANC wanted the vote for the chair of chairs to be done by secret ballot.

And then it just got physical as some ANC Cllrs make their way row by row. Some Cllrs can be seen trying to prevent them from going in between the seats. #JoburgCouncil pic.twitter.com/6kQhBC8mH2

After fists and water bottles were thrown in the air and a general disruptive attitude, council speaker Vasco da Gama adjourned the meeting just after 7pm.

Before the fighting started, earlier in the day, council kicked off by paying tribute to the five security guards who were killed at the Goudkopies landfill.

ANC councillor Loyiso Masuku passed on her condolences on the party's behalf.

"We want the family to know our thoughts are with them and we send our condolences," Masuku said.

EFF councillor Mvuzo Dlanjwa used his platform to urge law enforcement agencies to speed up the arrests of those involved in the killings.

"We condemn the killing of security guards with the contempt it deserves and urge law enforcement to move as swiftly as a cheetah."

Johannesburg mayor Mpho Phalatse has issued a stern warning to the city’s residents who don’t pay electricity bills, saying those who can’t afford to ...
News
1 month ago

Johannesburg executive mayor Mpho Phalatse has finally unveiled new members of her mayoral committee (MMCs) after protracted negotiations between the ...
News
1 month ago

In a statement on Monday, Moerane said it had been exactly 14 days since Phalatse was elected on November 22 but she had not yet been sworn in as ...
News
1 month ago
Next Article