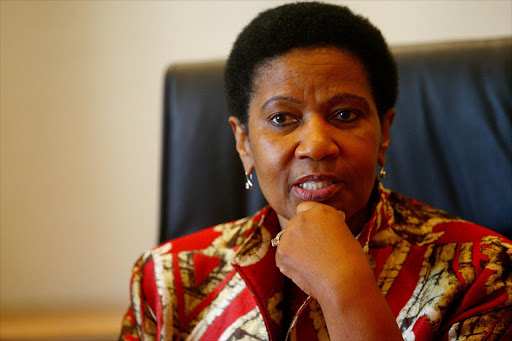 Former deputy president Phumzile Mlambo-Ngcuka has been installed as the chancellor of the University of Johannesburg.
Image: Veli Nhlapo/Sowetan

UJ council said her five-year term of office will run from October 1 until September 30 2027.

Mlambo-Ngcuka will succeed Prof Njabulo Ndebele, whose term as chancellor ends on September 30.

“UJ’s approach to impact reflects the UN Sustainable Development Goals (SDGs), something that Dr Mlambo-Ngcuka in her capacity as UN executive director of UN Women, has cherished and led. Indeed, she embodies all the UJ values and aspirations, values where equality, diversity and inclusivity have been part of the university’s success story," Burger said.

The chair of the UJ council, Mike Teke, said the position of chancellor at UJ demands a person of stature, exemplary moral and ethical values, someone who will not shy away from addressing some of the greatest challenges and someone who will speak for those who often have no voice in society.

"Such a person is indeed Dr Mlambo-Ngcuka. She is a distinguished person with a demonstrable record of excellence, leadership for the betterment of society, and service to her community. We look forward to her contribution towards our vision: An international university of choice, anchored in Africa, dynamically shaping the future," Teke said.

Teke said Ndebele has immensely contributed to UJ’s strategic direction and its growth as an important player in the higher education sector both locally and internationally.

“As the first woman to hold the position of deputy president in South Africa, Dr  Mlambo-Ngcuka provided political oversight to several programmes to combat poverty and bring advantages of a growing economy to the poor.

"In doing so, she embraced the technologies that the Fourth Industrial Revolution [4IR] provides, using ICTs for development. She would, therefore, be a most excellent ambassador for UJ’s approach for social justice and 4IR," he said.

More than 4,000 people, including the homeless, those who have lost their IDs and informal settlement dwellers, have received their Covid-19 ...
News
1 month ago

A #FeesMustFall benefit concert which aims to raise fees for students struggling to pay their fees will be held in March next year.
News
1 month ago
Next Article