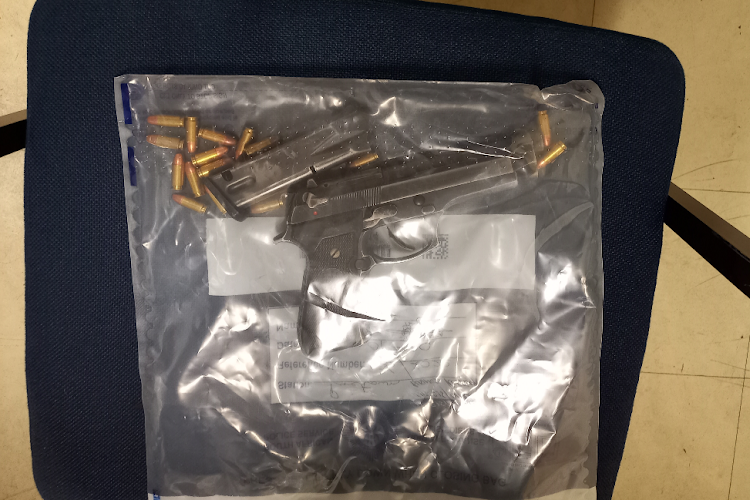 Police seized guns, ammunition, explosives and police uniforms from a car abandoned by suspected robbers after a chase.
Image: SAPS

Four men were arrested near Pinetown, west of Durban, on Sunday in possession of explosives and police uniforms.

“It is alleged that yesterday [Sunday] at 11pm, police responded to a report of a burglary in progress at a shopping centre on St Johns Avenue in Pinetown,” she said.

“Upon arrival at the scene police spotted a group of men attempting to flee the premises and they opened fire at police. Four of the suspects were subsequently apprehended and were found in possession of cellphones, drills, gloves, a crowbar and explosives.”

Police spotted a white vehicle “driving in the vicinity”.

“When police officers approached the vehicle the suspects sped off. Police gave chase and the suspects abandoned the vehicle on Wilson Drive in Caversham Glen. Upon searching the vehicle, officers found police uniforms, a bulletproof vest and a firearm with 16 rounds of ammunition.”

A shopping centre security guard later told police he was on duty when the same vehicle with five occupants in police uniform allegedly arrived at the scene.

“The security guard was forced into the vehicle and the panic button was taken away from him. He was dropped off in the bushes in New Germany. The suspects gained entry into the receiving area and they stole two cellphones from one of the shops.”

The suspects are expected to appear in the Pinetown magistrate’s court on Tuesday.

Private security guards securing refugees' monthly allowances were overpowered and robbed of US$60,360 (R962,742) at Tongogara Refugee Camp at ...
News
2 weeks ago

Policeman dies in shoot-out with robbery suspects in Cape Town

A 48-year-old police sergeant was shot dead and his colleague wounded during a shoot-out with a gang of robbers in Cape Town on Friday.
News
1 month ago
Next Article