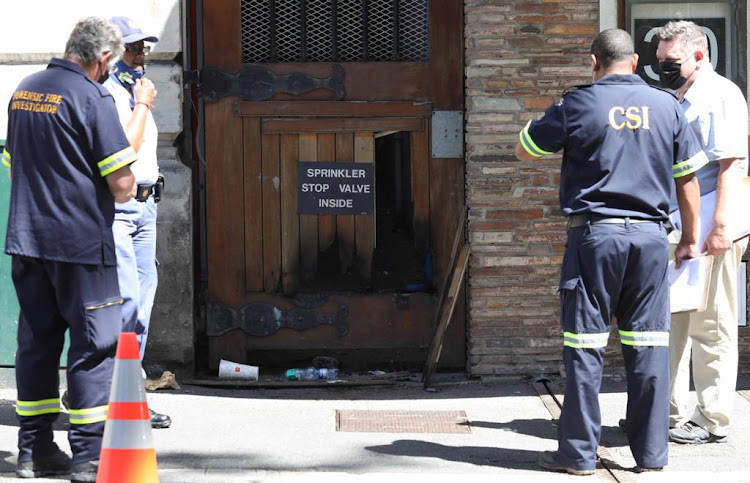 Investigators were seen taking swab samples from two plastic bottles lying at the base of the burnt door at the department of justice regional office in Cape Town.
Image: Esa Alexander

Forensic investigators are combing the scene at the department of justice regional office in Cape Town where a wooden door was allegedly set on fire.

The thick door which leads to a fire escape stairwell running along the side of the eight-storey building in Queen Victoria Street was partially burnt when TimesLIVE visited the scene on Friday.

Investigators were seen taking swab samples from two plastic bottles lying at the base of the burnt door.

The office overlooks parliament, which is a few dozen metres away on the other side of the Company Gardens.

City of Cape Town fire services had earlier handed over the National Assembly building in parliament to the Hawks, after it was allegedly set on fire by Zandile Christmas Mafe at the weekend.

There was no immediate indication that the two fires were linked. TimesLIVE is requesting comment from the SAPS and will update this article.

Mafe is accused of setting the building on fire using a flammable liquid, a charge for which he stands accused under the Explosives Act.

He faces two charges of arson, housebreaking and theft for allegedly stealing crockery and documents, and a contravention of the Key Points Act.

He is expected to appear in the Cape Town magistrate's court on January 11 for a formal bail hearing.

In a third incident involving the judiciary, a man was arrested on Wednesday for allegedly using a hammer to smash the windows of the Constitutional Court building in Johannesburg. He appeared in court on Friday.

The fire at parliament has been contained after the flare-up in the roof of the National Assembly on Monday..
News
4 months ago

The ANC in parliament has rejected Cape Town mayor Geordin Hill-Lewis's offer for parliament to use the city's facilities for next month's state of ...
News
4 months ago
Next Article