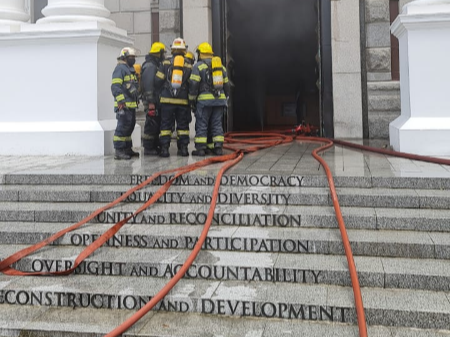 Parliament has confirmed the fire in the National Assembly roof has been contained.
Image: CoCT

The fire at parliament has been contained after the flare-up in the roof of the National Assembly on Monday.

“The last 24 hours had been critical with firefighters closely monitoring the scene,” parliament said on Wednesday.

“After the firefighters contained the fire at midnight yesterday they remained on site, though at reduced capacity, for monitoring the situation, to conduct a thorough assessment and to establish the extent of the damage.”

Since the fire broke out on Sunday morning, 300 firefighters working shifts and more than 60 fire engines attended the blaze. One fire engine remained at the scene with five crew members working to ensure no more flare-ups.

Mapisa-Nqakula, Speaker of the National Assembly answer questions on the alleged arsonist and if parliament will move to Tshwane during a ceremony to honour firefighters hosted at Roeland Fire Station @TimesLIVE pic.twitter.com/5WMUS3RkcQ

Parliament said the firefighters would make an assessment on Wednesday afternoon for a possible total withdrawal from the site and to check whether  the building is safe to be handed over to police.

Efforts to save the National Assembly mace were successful on Tuesday after two days of fire.

The presiding officers said the state of the nation address, the budget speech and other programmes would proceed as planned. Further details would follow.

A fire that ripped through parliament in Cape Town on Sunday has once again erupted and "engulfed the entire roof".
News
4 months ago