Parliament security guards were not on duty when fire broke out because of cost-cutting, says union 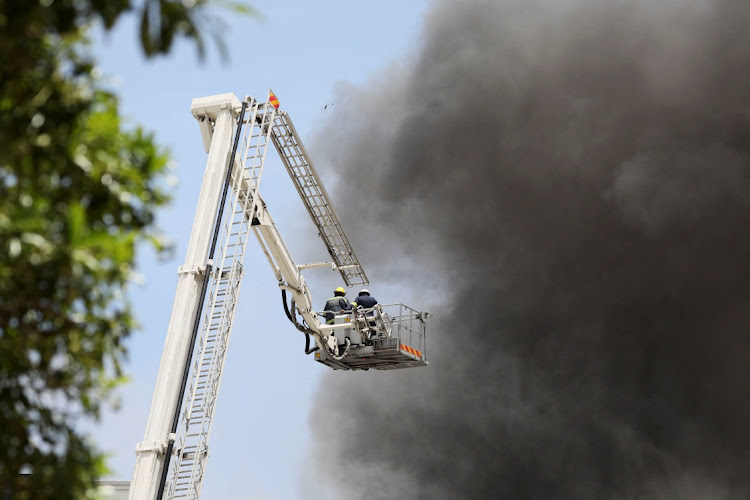 Firefighters are lifted with a crane at the site of parliament where a fire broke out on Sunday morning. REUTERS/Sumaya Hisham
Image: SUMAYA HISHAM

Heads must roll and parliament management must take responsibility for not having security on duty to prevent a disastrous fire that broke out in parliament in Cape Town on Sunday morning.

That's according to the provincial secretary of the National Education, Health and Allied Workers' Union (Nehawu) in the Western Cape, Baxolise Mali.

Mali said security guards were not on duty when the fire broke out due to a cost-cutting directive they received at the beginning of December.

"They stopped protection services (security) from coming in on weekends because they said parliament doesn't have money, so they would not be able to pay them for overtime," Mali said.

"Now the leadership and management of parliament must take responsibility for this sabotage. If protection services were on duty, the damage would have not been this extensive," he said.

Mali said parliament relied on police to do the guarding in the absence of security staff.

"The problem with the police is that they are only stationed outside the building and they are hardly inside, so it wouldn't be easy for them to detect the fire," he said.

I am alarmed that protection service nightshift workers were removed.

I am listening to the Nehawu representative speaking to the @SABCNews. #ParliamentFire

It seems that many health and safety and compliance protocols were not followed. This has really cost us as a nation.

Mali also raised the issue of the alleged failure of fire alarms to go off when the blaze started.

"That simply shows you that the occupational health and safety standards are non-existent in that building. We've been fighting a lot about compliance issues in that building, including the issue of security. There are a lot of break-ins in the building," he said.

Mali said parliament has failed to implement recommendations made by an external auditing firm, BDO which he said had made recommendations on how to make the building safer.

The recommendations followed a fire at parliament in March last year.

The City of Cape Town said they were on the scene at parliament six minutes after the call was received, and they were already on scene when the fire detection alarms activated for the first time.

Mali said parliament was a national key point area and security should have been a priority.

Meanwhile, OneSA leader Mmusi Maimane has called for the report to be released.

In a tweet, Maimane said: "We cannot take lightly the numerous mismanagement decisions and oversights that have led to this disaster. So many security and health and safety issues have been raised".

A fire that has damaged sections of parliament in Cape Town and now spread to the National Assembly chamber has sparked concerns over the opening of ...
Pic of The Day
6 months ago
Next Article