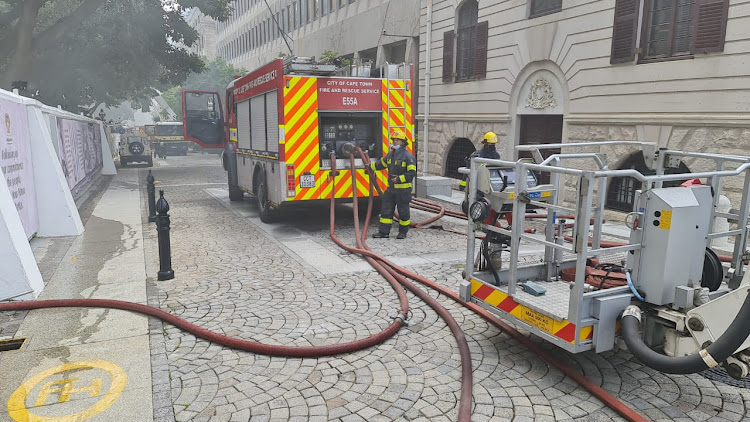 Fire fighters have been praised for their efficient response to the fire in parliament.
Image: CoCT

A draft report found there were no smoke detectors installed in the roof of the National Assembly building at parliament which was gutted by fire on Sunday.

“Please note that there are no smoke detectors installed in the roof space, hence the long delay before a smoke detector triggered in the new wing,” the draft inspection and assessment report — updated in July 2021 — stated.

Sunday’s blaze which ravaged the National Assembly is the second at parliament in less than 10 months. In mid-March 2021 a fire broke out in a committee venue in the old assembly wing, deemed to be the result of an electrical fault.

President Ramaphosa told media on Sunday he had been briefed that the building's sprinkler system “did not work as it was supposed to”, adding that the cause of the fire was being investigated.

“We are still going into what caused the fire and it having started in the old assembly,” he said.

“But we need to go a lot deeper and what measures we need to take going forward.”

Police spokesperson Brig Vish Naidoo confirmed that a 51-year-old man had been taken in for questioning in connection with the fire.

The report also found that:

—  All 70 smoke detectors in the Old Assembly were of the “conventional ionisation” type which were 16 years old and no longer manufactured because of their radioactive content.

— There appeared to be no fire dampers in the roof space which would have assisted in directing smoke away from a used space, and prevented smoke from spreading to other areas, and;

— There were cameras only at the lift lobby but “non-existent surveillance from the back side of the floors”.

Because the smoke detectors were conventional they could not be addressed “by any addressable system, except via an interface that communicates to 20 smoke detectors simultaneously, which could make it impossible to trace the fire easily”.

Temba Gubula, branch secretary for the National Education, Health and Allied Workers' Union (Nehawu) in parliament, told TimesLIVE the union was “not surprised” by the incident and had raised the alarm on health and safety contraventions.

“Parliament is in contravention of the National Occupational Health and Safety act,” he said.

“There was a fire last year and parliament ought to have learnt from that,” he said.

The building’s lifts' air-conditioning were often out of service.

“There’s a laxity in making sure the people in the precinct are safe.”

Gubula said parliament’s protection officers understood that working on public holidays was part of their conditions of employment.

Parliament’s decision to not have protection officers work on public holidays because of budgetary constraints was arrogant, he added.

“Parliament is a national key point. There are some things that you cannot put a price on.”

Ramaphosa heaped praise on Cape Town's fire department for the speed and vigour with which it tackled the fire.

“It does show that there are certain things that do work even if it seems that the wheels are coming off everything,” Ramaphosa said to reporters gathered outside the smoking building.

“The fact that they were here in a short space of time is something we should be grateful for,” he said.

The president noted that fire engines had been on the scene within six minutes of the alarm being raised.

“Had they not responded in the six minutes that they tell me [they did], I think we would be talking of the National Assembly being in ashes,” he said.

“They intervened at the right time.”

He said the cause of the fire that gutted part of parliament's National Assembly building will be fully investigated.

Parliament spokesperson Moloto Mothapo didn't respond to several queries about the lack of parliamentary protection services (PPS) and health and safety concerns raised in the report.

A fire that has damaged sections of parliament in Cape Town and now spread to the National Assembly chamber has sparked concerns over the opening of ...
Pic of The Day
5 months ago

President Cyril Ramaphosa says one person is being held for questioning after a fire broke out in parliament in the early hours of Sunday.
News
5 months ago
Next Article