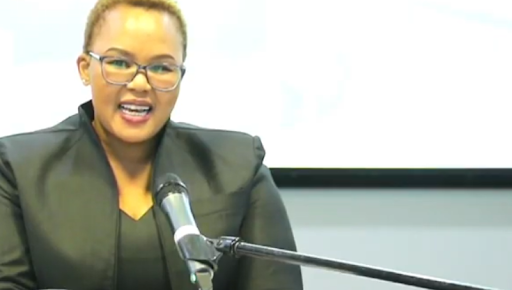 Lindiwe Rusi, who is in the running for a position as a judge in the high court in the Eastern Cape, has had to answer to allegations that she resigned from Legal Aid SA after it was alleged that she had accessed and distributed pornographic material through a work PC.
Image: Screengrab

An alleged “pornography scandal” emanating from a faceless complainant on Thursday threatened to damage the chances of a female acting judge hoping to get a seat as a permanent judge in the Eastern Cape High Court in Mthatha.

Lindiwe Rusi was almost reduced to tears as she told the Judicial Service Commission (JSC) that she knew nothing of allegations that she left Legal Aid SA in 2009 after being entangled in a pornography scandal.

“If there was any truth to these allegations, I would have spared myself the embarrassment of coming before this honourable commission,” she said, adding that the complaint was nothing but malicious and defamatory.

Rusi was asked about the allegations by judge president of the Supreme Court of Appeal  Mandisa Maya during her interview.

Maya said the complaint received was that, “while working for the Legal Aid board you accessed and distributed pornographic material using your employer's computers and disseminated that material among male candidates employed by the Legal Aid board. Instead of dealing with that issue when it was raised with you, you resigned on 24-hour notice”.

Rusi said she had been made aware of the complaint and had responded. She offered her response to the JSC.

Age is not just a number. This was the impression given by acting chief justice, Ray Zondo when he interviewed a Gauteng judge-hopeful, advocate ...
News
10 months ago

“At Legal Aid SA, we shared computers. On my arrival, I found an open plan set-up where anyone would use any computer at his or her convenience. There was a stage where the management of Legal Aid SA complained that practitioners and other staff members were using computers for private material,” said Rusi.

“When it was said that certain obscene material was discovered on one of the computers, I was never shown any such material and I had never been told that the private material belonged to me.  So when I saw the objection, it was really difficult for me to even defend myself because I knew the set-up of Legal Aid SA at the time,” she said.

She added that the warning about private use of the computers was not directed only to her but to all employees at the time. Rusi added that she had never met or worked with the person who had submitted the complaint.

“I’m not sure how it would have been possible for me or anyone to access obscene material at Legal Aid through computers when there was not even access to internet.”

Maya, however, revealed that according the complainant, Rusi was sued by Legal Aid SA after she hastily resigned, giving only a day’s notice.

“I was never sued by Legal Aid SA. There’s no judgment against me involving Legal Aid SA hence I did mention that the objections seems malicious and somewhat defamatory,” Rusi told the JSC.

She choked back tears, telling the commission she had worked hard and made sacrifices only for her name to be tarnished by a faceless complainant.

She explained that she left Legal Aid SA, offering 24-hours notice, because she was offered a magistrate's position at Mt Ayliff after the death of a magistrate. She accepted the position and started the new job the next week.

This revelation, however, led to more criticism of Rusi as she was quizzed by commissioners about why she did not serve a full month's notice as required by her contract.

Rusi said she was not the only Legal Aid SA employee at the time to leave after 24 hours, adding that the “toxic nature of the environment had led to it to being a norm” to avoid sabotage.

Acting chief justice Raymond Zondo, however, said just because a lot of people did it, did not make it right and Rusi acknowledged that.

Commissioner Mvuzo Notyesi took the commission back to Rusi’s work, saying she had been brought into an acting position on strong recommendations by her peers — a revelation that calmed Rusi down.

Rusi was one of five candidates being interviewed for a single vacancy in the Mthatha high court.

One of her notable opponents for the position was advocate Nceba Kirby Dukada SC, the most senior and experienced of the candidates.

But Dukada’s interview was overshadowed by an unresolved investigation by the Special Investigating Unit (SIU) due to a department of justice complaint about him regarding questionable invoices he had submitted.

SowetanLIVE's sister publication DispatchLIVE reported on those proceedings in April.

The same allegations and concerns were raised during Dukada’s interview for the same position in April and led to him withdrawing with the intention of settling the matter and returning with a report stating that all was clear. At the time, he had also revealed that he had not yet received his certificate of good standing from the Johannesburg bar, where he was also serving.

Pleas for leniency and a chance to prove herself were fruitless for acting judge Livhuwani Vuma on Wednesday as the Judicial Service Commission ...
News
10 months ago

But much to the ire of some of the commissioners, Dukada had returned to the JSC without resolving the issues.

Zondo pointed out that such serious issues could lead to him not being considered for the position.

On the letter of good standing, Dukada had felt he had resolved that by leaving the Johannesburg bar and joining a legal society in Mthatha, saying there was nothing else tying him to that bar.

But Zondo pointed out that his view was skewed, adding that if there were any matters to be addressed, these were not dissolved by his resignation.

It was understood that the SIU investigation stemmed  from 2018. He claimed he had not heard from them in the past few years, leading him to believe that with all the information he had supplied, there was no case to investigate.

One of the commissioners, advocate Glynnis Breytenbach, asked Dukada why after that April interview he never went back to the SIU to find out the status of the investigation, explaining it was jeopardising his career.

Arms folded, Dukada answered that he did not see the need to because he was cleared by a previous investigation. The investigation he was referring to was done by the department of justice itself.

He replied to another commissioner that he did not see the need to lose out on being interviewed for this position again because of a case that the SIU had not acted on.

Zondo stressed that it would be “embarrassing for the JSC if these allegations later led to criminal charges”.

Dukada, 63, held on to the hope that the letter of good standing he held from Mthatha would serve as evidence that he was backed by them to take up this position, but again Zondo said the certificate simply meant he was up to date with subscriptions and had nothing to do with recommendations.

Dukada remained adamant there was nothing that gave him the impression that he could not be appointed as a judge.

The JSC will make its recommendations for the post.

Opportunities and training that white senior lawyers gave to black lawyers during the height of apartheid paved the way for some of those black legal ...
News
10 months ago

Once these appointments have been made, the president must still fill a further two vacancies and appoint a chief justice before the Constitutional ...
News
10 months ago
Next Article