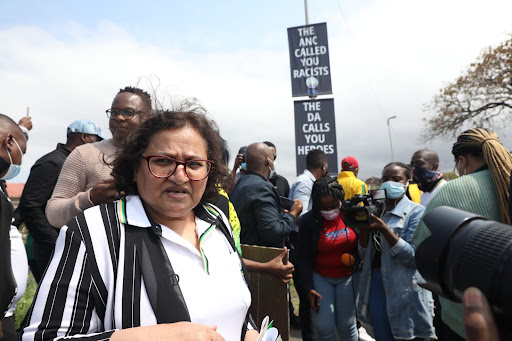 The DA's decision to remove its “racist vs heroes” campaign posters will not shield the party from the consequences of its divisive messaging, says ANC deputy secretary-general Jessie Duarte.

“These posters stayed up for a really long time and they created a lot of damage already in the minds of people,” she said.

Duarte campaigned in Phoenix, north of Durban, on Thursday ahead of President Cyril Ramaphosa's visit this weekend.

DA posters in Phoenix declaring “The ANC called you racist. The DA calls you heroes” went up on Tuesday, resulting in a political firestorm, as they were seen as racially insensitive.

ANC DSG Jessie Duarte is in Phoenix. She doesn't want to stand against these DA posters for interviews and pictures. "I don't want to be associated with this, this is disgraceful. We will be reporting it to the Human Rights Commission," she says. pic.twitter.com/JoK7SUcSL2

DA KwaZulu-Natal chairperson Dean Macpherson on Thursday apologised and said the party was removing the posters which “inadvertently caused offence”.

“In my sincere effort to honour the bravery and heroism of law-abiding citizens who were left to fend for themselves during the July riots and insurrections, the posters have regretfully caused hurt to some people. I am deeply sorry and apologise for this,” Macpherson said.

While Duarte said taking the posters down was a “good thing”, she is convinced that it is not enough and said the ANC would go ahead with a complaint to the Human Rights Commission.

“It's created new anger that had abated already and this is what we must undo. It has given a perception that racism is OK and vigilantism is OK and the message has resonated, it will not go away that easily,” said Duarte.

The posters referred to events that took place during the July unrest in the Indian-dominated suburb which led to the death of 36 people.

The DA posters suggested that the community were heroes for protecting their properties against rioters and, while Duarte conceded that anybody under threat might want to protect themselves, killing people was unacceptable.

Duarte likened the killings to criminality and vigilantism.

“The conversation we must have with all our communities is how to react when there is a crisis. Yes, there might be people who see themselves as heroes and the DA might be pandering to that but it's a sentiment that cannot go anywhere,” she said.

“Our message is we need to build cohesion in this community. People live together here. It's not as if there is a barrier, there is no passbook. We are all citizens together and that is the message we want to bring.”

She said the DA was promoting racism and criminality.

“Many communities stood up and protected their communities but it is only here where that resulted in deaths. What the ANC is saying is there is no need for us to continue on the trajectory of African vs Indian vs White, that is the past.”

The backlash against the DA’s controversial “racists v heroes” election posters gained momentum on Wednesday with families of the victims of the ...
News
3 months ago

Sources in the DA say the party’s senior leaders in KwaZulu-Natal are pushing for their national leaders to concede that controversial election ...
News
3 months ago
Next Article