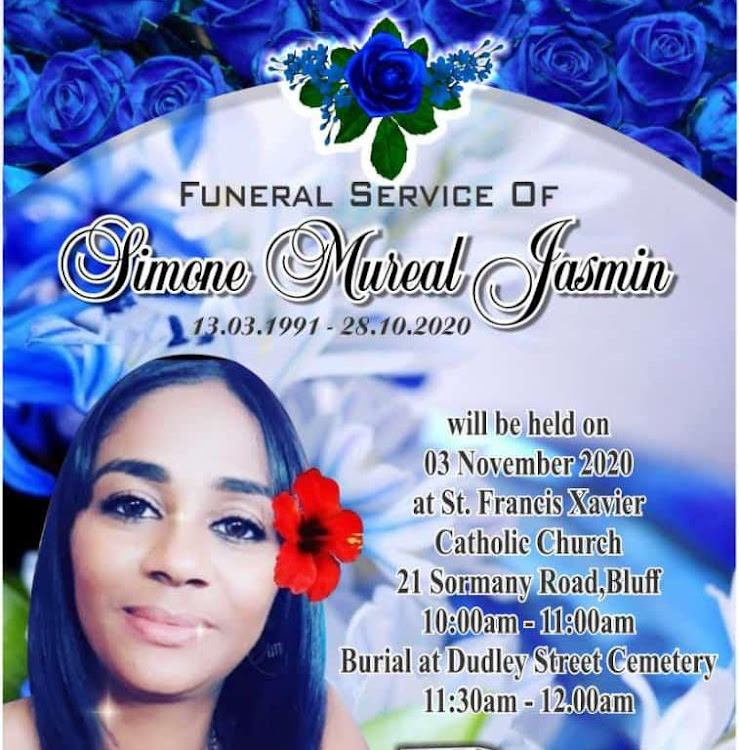 Simone 'Moni' Jasmin was known as the Queen of the South in the Wentworth community because her life resembled that of the main character in a Mexican telenovela of that name.
Image: supplied

Scores of mourners, some inconsolable, lined Marine Drive on the Bluff, south of Durban, as the white hearse carrying the body of an alleged drug kingpin, Simone Jasmin, drove by on Tuesday morning.

Jasmin, 29, who was known as the Queen of the South in the Wentworth community because her life resembled that of the main character in a Mexican telenovela, was killed in a well-orchestrated assassination on Thursday.

The community was divided as the funeral procession made its way to a church near her home on the Bluff.

Some rejoiced the end of her reign as an alleged drug kingpin, while others openly wept as they remembered her for the birthday parties she threw for children in Wentworth and the food hampers she handed out to the community.

Jasmin, allegedly the leader of the notorious Cartel gang, was out on bail on murder and attempted murder charges when she was shot several times in an e-hailing vehicle. She died in hospital.

It is believed Jasmin's alleged drug network spread as far as Umlazi and KwaMashu and over the years she had been linked to several killings.

Queen of the South is an adaptation of the telenovela La Reina del Sur, which centres on Teresa Mendoza, a poor Mexican woman who becomes wealthy by building a vast drug empire.

Can you smoke dagga before work?

At a recent hearing of the Commission for Conciliation, Mediation and Arbitration (CCMA), commissioner Nomsa Mbileni ordered the reinstatement of a ...
News
1 year ago

Former rugby player Zane Kilian allegedly found himself in a pack with an alleged notorious Cape Town gang - and now the state wants him to account ...
News
1 year ago
Next Article