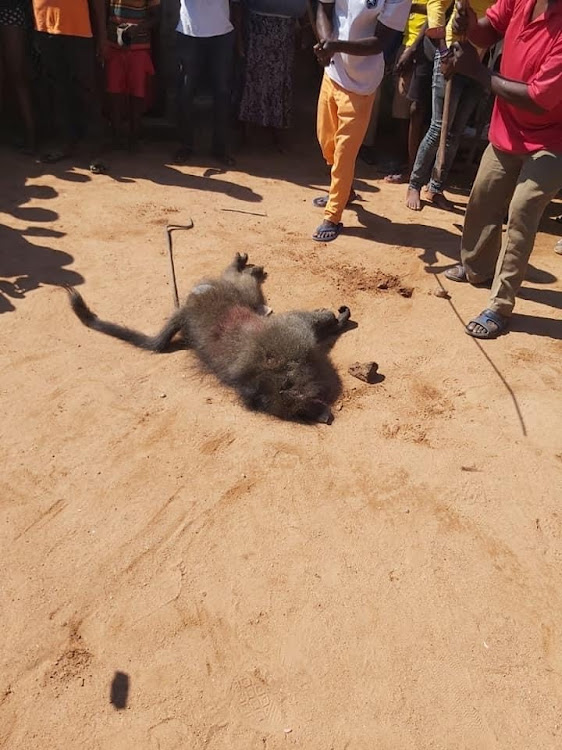 community members of Jeppes Reef near the Matsamo border the Kingdom of Eswatini killing a baboon.
Image: Mandla Khoza

Mpumalanga MEC for community safety, security & liaison Gabisile Shabalala has called for the people of Jeppes Reef near the Matsamo border with Swaziland to respect the lockdown regulations of staying home after residents on Sunday gathered to kill and skin a baboon which was found wondering on the streets.

Sowetan was called by community members who said that they were busy preparing to eat a baboon which they had killed as a community.

When pictures of the slaughter emerged on social media, it prompted Shabalala to warn the community that they were breaking the lockdown regulations as well as the law.

“This now wrong; as the department we condemn the behaviour of some communities [together] with the one in Nkomazi [municipality] where people decided to kill an animal in large numbers," Shabalala said.

A total of 72 schools have been broken into in Mpumalanga since the start of the national lockdown, the province's education department revcealed on ...
News
1 year ago

"We are warning against such gatherings because that is against the lockdown regulations [about] where people should now gather, as we are trying to curb the spread of the coronavirus pandemic. Again, it’s criminal to even kill an animal just because they have seen it in the community.

"It is deeply regrettable that our people would still gather in such a manner. We are appealing [to them] to work with us and stay at home during this difficult phase. To save the public, the police should act against such behaviour,” said Shabalala.

One community member who didn’t want to be named told Sowetan that they initially thought the baboon was from a certain house.

“People came in large numbers and we were told that it [the baboon] was from a person whom was suspected to be casting spells using it. But some people decided to burn and eat it because they said that was meat,” said the community member.