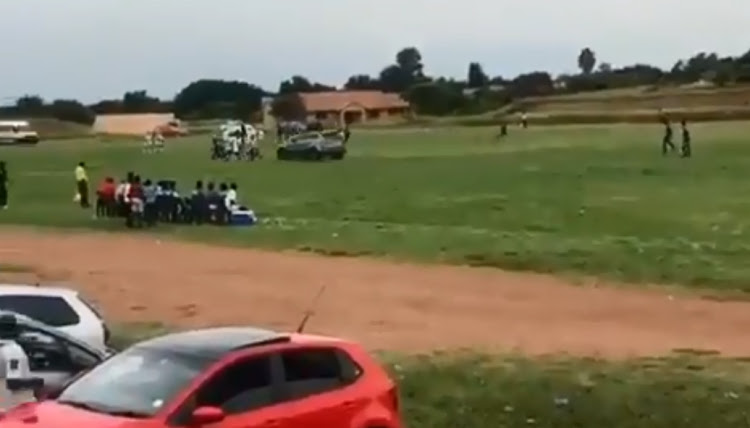 A video of a luxury SUV driver who invaded a soccer pitch and tried to run over players and match officials during the ABC Motsepe League match in Brits, North West, has gone viral on social media.

The unidentified driver of a BMW X5 drove into the pitch at high speed during the match between Luka Ball Controllers and Polokwane City Rovers on Sunday.

According to eyewitnesses the horror pitch invasion happened eight minutes before the game ended with the visiting team Rovers leading 2-1.

"This person came out of nowhere and tried to run over anyone in sight. This was not a dispute about the match or anything. There were no fights in our game. The driver was also trying to run over the players from Luka so it seems to us that it was someone acting on his own,” Rovers owner Tyzer Temo told Sowetan.

Yesterday we were watching a great game of soccer between #ABCMotsepeLeague 's Polokwane City Rovers and Luka Ball Controllers when all of a sudden some guy wanted to run his car over the referees. @MarawaSportShow@robertmarawa @SAFA_net @FARPostZA @thomasmlambo @SPORTATSABC pic.twitter.com/1oqDuUDiwI

“What happened yesterday was very scary and I even start to shake when I think about it.”

The ABC Motsepe League  has a bad reputation for violence, corruption and criminal acts. In March last year the owner of Tornado FC Siphiwo Nyobo was shot dead during a game in East London.

Safa North West chairman David Molaontoa has called for criminal charges to be laid with the police against the driver of the BMW X5 who drove on the pitch in Brits.

“We urge those who were at the match to lay criminal charges against this perpetrator. Our disciplinary committee will investigate the matter but our criminal justice system must also get involved,” he said.

Apparently he wanted to run over the referee 😞. TF?! #ABCMotsepe pic.twitter.com/dqjUCUyIHv