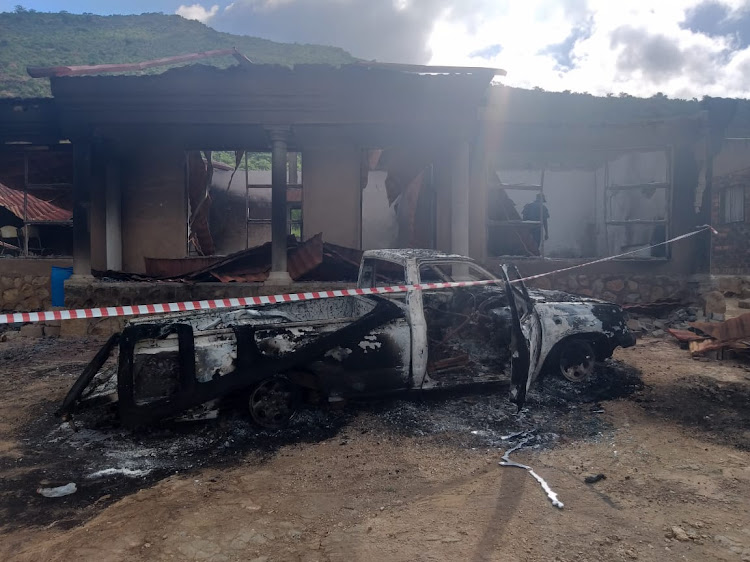 Charred remains of a 62 year old man and the hacked body of his 57 year old wife were found in Driekop outside Burgersfort.
Image: Peter Ramothwala

Police in Limpopo are investigating a possible incident of domestic killing after the discovery of charred remains of a 62-year-old man and the hacked body of his 57-year-old wife on Wednesday morning in Driekop outside Burgersfort.

Police spokesperson Brig Motlafela Mojapelo said police were called by community members from Ga-Mahlokwana village after they were alarmed by the hysterical screams of children at a house which was also on fire. "They responded swiftly together with the fire brigade and medical emergency services," Mojapelo said.

"Upon arrival, the house was already engulfed in flames and the couple's motor vehicle, a Nissan bakkie, totally burnt out," he said.

Mojapelo said police commenced with initial investigations at the scene and made the gruesome discovery of the bodies.

"The woman’s body was found  inside the shack and the charred remains of her husband inside the gutted five-roomed house.

"During further investigations, the police found the blood-stained murder weapon next to the woman’s body and the bottle containing the remnants of a flammable substance was also discovered in the vicinity."

He said police are investigating the possibility that the 62-year-old man chopped his  wife to death, torched their motor vehicle and thereafter doused himself with a flammable substance in the house and set himself alight.

"It is not yet known what led to this grisly incident but domestic violence cannot be ruled out. Cases of murder, arson and malicious damage to property have been opened and police investigations are under way," said Mojapelo.

Three KwaZulu-Natal men have been arrested for murder after the charred remains of a 15-year-old girl was discovered in Northern KZN.
News
1 year ago
Next Article