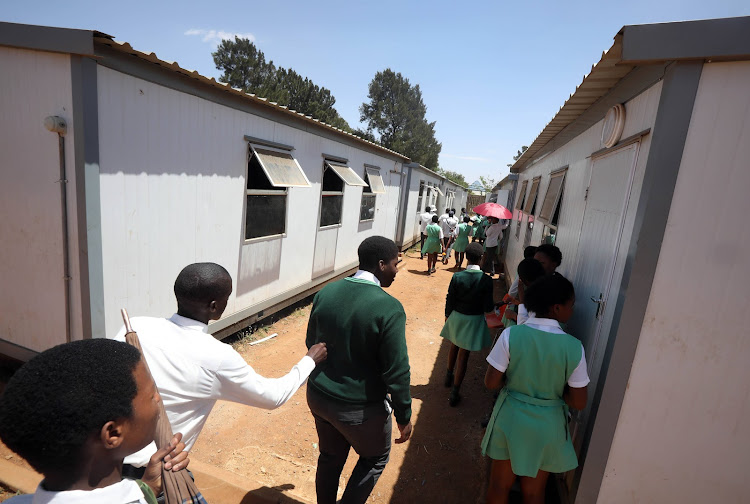 Exams at Kwadedangendlale High School in Zola, were disrupted after a contractor providing mobile classrooms cried foul over the payment.
Image: Antonio Muchave

Final examinations for grades 10 and 11 were delayed at Kwadedangendlale School in Zola North, Soweto, on Monday as a building contractor threatened to move 16 mobile classroom containers, complaining about a payment dispute.

A group of angry parents picketed outside the school to prevent the mobile classrooms from being removed.

School governing body (SGB) chairperson William Mabaso said the construction to rebuild the school started on January 2 and was supposed to be completed in the first week of December.

“I received a call from the contractor who said they have terminated their contract with the department over payment issues. They told me to leave the keys as they want to come and take their mobile containers. We could not allow them to take the mobile classes as the pupils would have nowhere to write their examinations because some of the classes have already been demolished,” Mabaso said.

Mood of matriculants dimmed as load-shedding hits schools during exams

The basic education department has not yet determined the impact of stage 2 load-shedding at schools across the country.
News
2 years ago

Mabaso said their concern was the safety and education of their children and there were parents threatening that grade 12 pupils would not be able to write their final exams on Wednesday if the issue is not resolved.

Sowetan first reported on the school’s terrible conditions in May last year. Some classrooms were in a state of disrepair with bricks falling off the walls and holes in some of the floors.

Junior Dlamini, a parent, said they want to know how their children will write the examinations.

“This is one of the best-performing schools in Gauteng and that showed in our 2018 matric results. With all the problems that our children were faced with, they managed to obtain a 93% matric pass rate,” she said.

A 16-year-old grade 10 pupil said the situation was frustrating as they had prepared for their first exams.

“We have been standing here waiting for the classrooms to open but we don’t know what is happening. We will even forget some of the information,” she said.

Gauteng education spokesperson Steve Mabona said they can confirm that the school raised the issue of infrastructure problems with the department.

“Given the nature of the risk, the Gauteng department of infrastructure development (GDID) elected to appoint an emergency contractor to deal with stabilisation of elements of the building while going through the motions of appointing a contractor to attend to the overall refurbishment of the school,” Mabona said.

He said the contractor started off by delivering 19 of the required 33 mobile classrooms.

“After delivery the contractor raised the issue of them having under-priced on the contract to the extent that this would deem them unable to deliver on the project successfully and they decided to terminate the contract. GDID is currently in the process to finalise the final account of this contract and will appoint a new contractor to continue with the refurbishment of the school,” Mabona said.

Grade 9 certificates not the end of the schooling road, says department

The education department on Monday told parliament that the proposed grade 9 certificates would not signal the end of pupils' schooling journeys.
News
2 years ago

‘Good luck matrics, you have our support’ – MEC Panyaza Lesufi

Gauteng education MEC Panyaza Lesufi has wished matric pupils good luck as they prepare for their final examinations.
News
2 years ago
Next Article