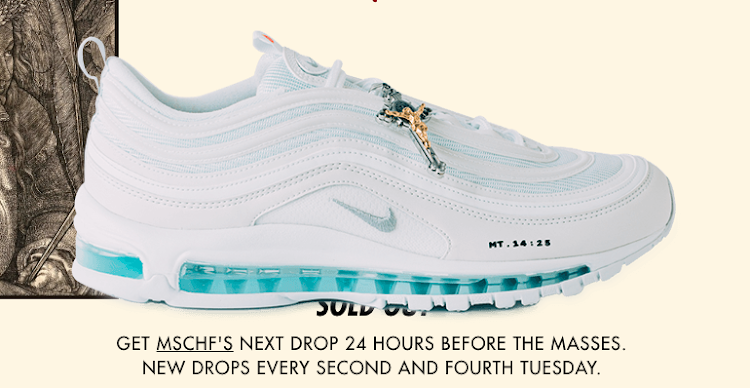 A pair of $3,000 (about R44k) sneakers dubbed 'Jesus Shoes' are the latest 'IT thing' and lucky owners can literally walk on water.
Image: Screenshot/MSCHF website

The shoes, created by Brooklyn-based label MSCHF, were released online on Tuesday and sold out minutes after being made available to purchase.

According to Hypebeast, not only do the shoes contain holy water in the soles that came from the Jordan River and was blessed by a priest, but a cross has also been placed on top of the laces on the right sneaker.

A Bible verse from Matthew 14:25 is also referenced on the side of the shoe and a drop of red ink that symbolises the blood of Christ is visible on the tongue of the sneaker.

The repurposed Nike Air Max 97 sneakers have no affiliation with Nike, despite the  branding, Highsnobiety reported.

Head of commerce at MSCHF Daniel Greenberg told the New York Post the brand was fascinated by the idea of “collab culture”.

“We thought of that Arizona Iced Tea and Adidas collab, where they were selling shoes that advertised a beverage company that sells iced tea at bodegas.

“So we wanted to make a statement about how absurd collab culture has got.”

He said the idea of adding water came from being a Jew and the only thing he knew about Jesus was that he walked on water.

The sneakers are currently sold out but the new creations will be released online every second and fourth Tuesday of the month and the countdown has began.