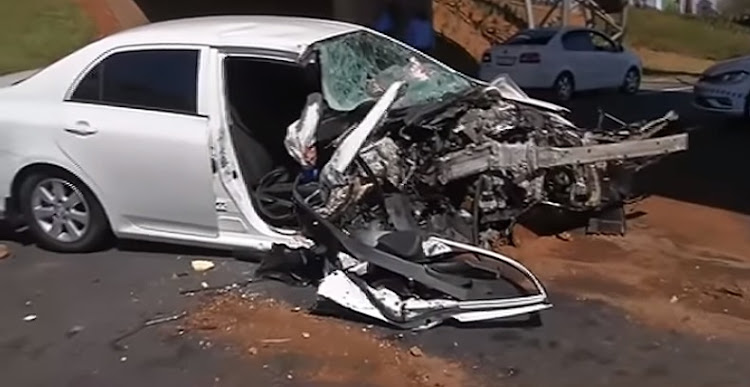 The wreckage of the car driven by Gavin Watson.
Image: Screengrab via eNCA

Watson died after a car crash into the concrete pillar of a bridge near OR Tambo International Airport. At the scene of the crash, mangled parts of the Toyota Corolla he was driving lay strewn on the bloodied tar road.

Watson's vehicle was a complete wreck with its front almost entirely reduced to pieces and the driver's side severely damaged.

The front windscreen was shattered from what appeared to be a huge impact during the crash.

Ekurhuleni Emergency Services had to put sand on the road to cover the blood stains  and motor fluids that had spilt out.

The pillar of the bridge that Watson's car hit showed the marks where the car hit it before it spun back onto the R24.

By midday, a small contingent of journalists had gathered to capture the horrific scene.

Agrizzi told the commission that Watson knew about the dodgy deals.