By Karabo Ledwaba and AFP

A white South African woman who moved to Hong Kong has become a topic of discussion on social media after a video of her making a plea for Hong Kong protests to stop went viral.

The young woman dressed in a yellow dress was in tears as she explained to AFP journalist Elaine Yu that she moved from South Africa to get away from protests. Earlier she had knelt before the Chinese police with her hands in prayer.

“South Africa has this…I don’t want this. This is not the Hong Kong that I’ve learnt to love. Everyone in Hong Kong is so loveable and welcoming for all foreigners and then to experience this … it hurts me,” she said.

When she was asked by journalists what she thinks about the police’s actions towards protesters she said there is a good and a bad side to both parties.

“This is not the Hong Kong I want to be in, like really I don’t,” she said.

She said she lives in the area, and explained: “I came from South Africa to move away from this... I don’t want this. This is not the Hong Kong I’ve grown to love.” pic.twitter.com/q8rO0Jxnbo

@_Kutlwano said: “It's sad how white South Africans aren't even engaging in a trending tweet about them. Ignorance is super bliss”

@KMalebeye_ tweeted: ”The entitlement that white South Africans have is beyond crazy, now she is showing the world what we have to deal with on a daily.”

@Pianopella tweeted: “There’s literally no race that’s as entitled as white South Africans on this planet.” 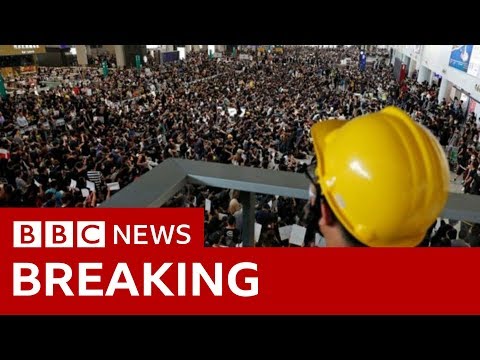 According to the latest reports by AFP, all flights in and out of Hong Kong were cancelled on Monday after thousands of pro-democracy protesters flooded the city’s airport.

Over the past 10 weeks of the protests, the Chinese government has responded with an iron fist

The developments marked yet another dramatic escalation in a 10-week crisis that had already become the biggest challenge to Chinese rule of Hong Kong since the 1997 British handover.

Although other rallies had been held at the transport hub over the previous three days, the airport authority said Monday's one had caused significant chaos."Airport operations at Hong Kong International Airport have been seriously disrupted as a result of the public assembly at the airport today," it said in a statement."

Other than the departure flights that have completed the check-in process and the arrival flights that are already heading to Hong Kong, all other flights have been cancelled for the rest of today." It warned that traffic to the airport was "very congested" and the facility's car parks were completely full."

Members of the public are advised not to come to the airport."Loudspeakers at the airport were periodically telling people: "All flights have been cancelled, please leave as soon as possible".

At the airport, protesters held signs reading "Hong Kong is not safe" and "Shame on police".

They accuse police of using increasingly violent and disproportionate tactics to suppress protests.

Over the weekend police fired tear gas into subway stations and crowded shopping streets as they confronted protesters at nearly a dozen locations across the city.

Demonstrators were also enraged at police apparently dressing in the black T-shirts worn by the pro-democracy movement to infiltrate the rallies and make surprise arrests.A government official said 45 people were hurt in the clashes, including two who were in serious condition.

Among them was a woman who suffered a serious face injury, reportedly after being hit by a bean bag round, with rumours circulating that she had lost her vision in the incident.

Images of her lying on the ground with blood pouring from her face quickly went viral and featured on posters calling for new demonstrations.

Many of the demonstrators at the airport on Monday wore eye patches or bandages in solidarity with the injured woman."It is becoming more and more dangerous, but if we don't still come out at this point, our future will become more frightening, and we will lose our freedoms," said one 22-year-old protester who gave her family name as Chan.

It was the 10th consecutive weekend that protesters had taken to the streets in a movement that began over opposition to a bill allowing extradition to mainland China.

The protests have morphed into a broader bid to reverse a slide of democratic freedoms in the southern Chinese city.

"This wantonly tramples on Hong Kong's rule of law and social order.

"The protests have infuriated Beijing, which has lashed out at the city's carrier Cathay Pacific, imposing new regulations on the airline that ban staff sympathetic with the demonstrations from flying to or over the mainland.Cathay has found itself caught in the crossfire in the increasingly bitter standoff in the city, and warned staff on Monday that they could be fired if they participated or supported "illegal protests".