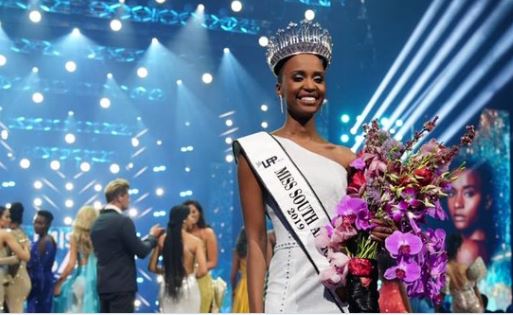 Twenty-five-year-old Zozibini Tunzi was crowned as Miss South Africa 2019 on Friday in a glitzy ceremony at the Sun Arena in Pretoria.

She took over the crown from last year's winner Tamaryn Green.

Zozibini beat 15 other dazzling young women from across the country to scoop the prestigious crown.

Our new #MissSA2019, Zozibini walks the runway for the first time ?????? pic.twitter.com/HAcvdqKBof

She will now represent the country on a global stage at Miss Universe SA. Zozibini made it to the top two and beat out Sasha-Lee Olivier.

Zozibini was a fan favourite and bowled over the judges when she stressed the importance of education.

"I am firm believer in education, and I would advise that they push education. We might not be able to do much for elders, but we can do so much for children by starting them early," she told the judges.

Bonang Matheba once again hosted the pageant and wowed audiences with her majestic looks and on-point presenting skills.

Anele said she was looking for a contestant that had "a lot of little stories" to make her relatable to the whole of SA.

Demi-leigh said that pageant was "the most important job interview of your life", while Connie said she was blown away by the talent.

Zozibini walks away with a lucrative R3-million prize package, which includes a R1-million cash prize, a new car and a fully-furnished apartment for the year of her reign.