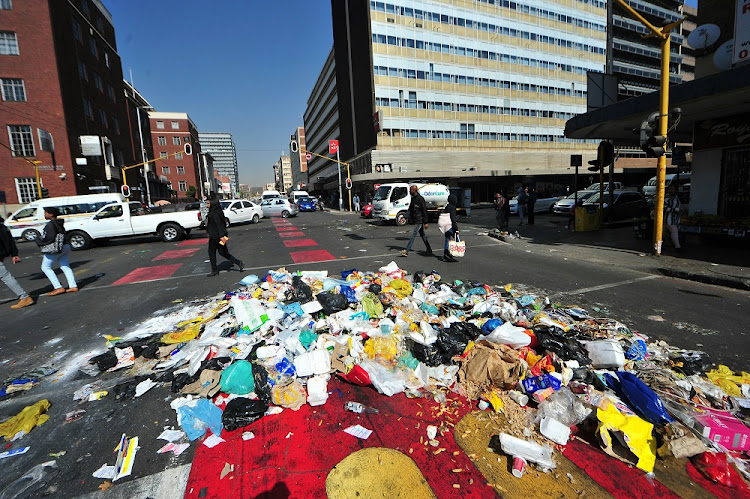 Hundreds of City of Tshwane municipal workers protest over salaries in the city centre. The workers are demanding 18% salary increase backdated to 2017.
Image: Veli Nhlapo

The Pretoria inner city has been brought to a standstill for a second day in a row as a wildcat municipal workers' strike continues.

Workers demanding an 18% salary increase have blockaded several intersections in the inner city with municipal buses and trucks.

This comes despite the City of Tshwane obtaining an 11th-hour court interdict against the strike which has seen dozens of businesses shutting their doors in the CBD and causing massive traffic gridlocks.

The labour court in Johannesburg ordered workers to return to their posts with immediate effect.

However, there was no sign of normality in the city on Tuesday morning with streets littered and most of the inner city not accessible.

Workers went on strike allegedly after it emerged that the city would pay its municipal manager, Moeketsi Mosola, a hefty R7.5m golden handshake.

The City of Tshwane obtained an interdict against a wildcat municipal worker’s strike that brought the Pretoria CBD to a standstill on ...
News
3 years ago

The R7.5m paid out to City of Tshwane manager Moeketsi Mosola is at the centre of the municipal workers' strike as they brought the Pretoria CBD to a ...
News
3 years ago

Buses caused havoc in the Pretoria CBD on Monday morning as some City of Tshwane employees went on strike demanding 18% salary increases.
News
3 years ago

City of Tshwane and Moeketsi Mosola have agreed to part ways “amicably ” this week in a move that will see the embattled city manager pocket about R ...
News
3 years ago
Next Article