The ANC top six and its national working committee will decide on Derek Hanekom’s future as a member of the party’s national executive committee (NEC).

This comes after the NEC meeting this past weekend decided that his admission that he met with the EFF to discuss ousting former president Jacob Zuma in a looming motion of no confidence in 2017 was referred to ANC officials for further investigation.

ANC deputy secretary-general Jessie Duarte told a media briefing on Tuesday that the resolution was that the matter called for further investigation.

“In this case, the accusation that is made by a member of an opposition party and what the NEC has directed us to do is to go and look at the veracity of the statements made by the EFF,” said Duarte.

“Also to look at when comrade Hanekom says he did have discussions with the EFF what were those discussions.”

Hanekom confirmed that he met EFF secretary-general Godrich Gardee several times in meetings that included the removal of Zuma from power through a motion that was tabled in parliament.

Hanekom was adamant that he did not contravene any ANC rules as fellow MPs met all the time.

It was reported that Hanekom’s matter was an issue of contention this past weekend with some NEC members calling for his head while others stood by him.

It has now been decided that the NWC should make a determination on what disciplinary actions, if any, Hanekom should be subjected to.

Duarte said that the matter was referred to officials as this would give Hanekom an opportunity to explain his remarks and also to decide which structure should deal with him should disciplinary actions be recommended.

“… [It is] to give people opportunity to state what it is that they believe they have done incorrectly and then what will happen is the officials will then agree where this particular matter might go to. It might well go to the committee dealing with the allegations around the formation of smaller parties,” she said.

ANC secretary-general Ace Magashule said that his late-night statement, in which he referred to Hanekom as a “charlatan”, was not discussed.

Responding to Hanekom’s admission that he met with Gardee, Magashule last week wrote a worded statement labelling him a wedge driver and an EFF sleeper. 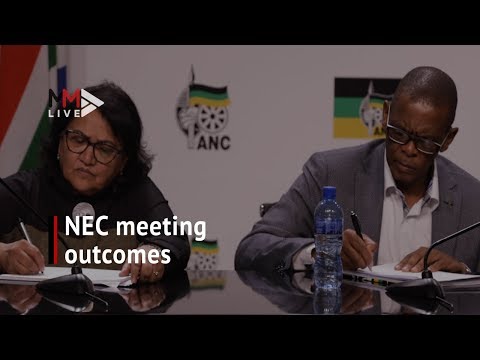