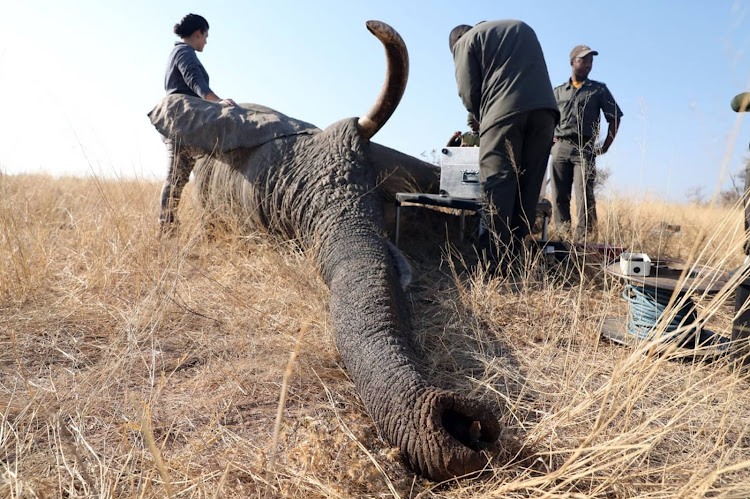 Goose has been kept in a confinement for 10 months after poachers shot her and fractured her left back foot.

Goose is the only black rhino kept in a boma (confinement made of wood) among a group of 12 rhinos rescued in poaching incidents at the Kruger National Park, in Skukuza, Mpumalanga.

Her recovery since September 2018 has been one of the most difficult tasks for the vets who have tried to repair her foot.

When she was found, bones were protruding and her foot was badly deformed. Goose has had a skin graft done to help the wound heal faster. At the beginning of her treatment she had to take a lot of antibiotics and anti-inflammatory tablets, about 70 a day in total. These were put in her food.

Catherine Dreyer, black rhino specialist at the Kruger National Park, said Goose had to be kept as it was possible to get a calf from her, something which would be a great achievement knowing that her species population is on a decline.

“It is a learning curve. We’ve never dealt with something like this…When she came in we placed a bandage on her but that could not last long. We had to immobilise her almost every four days. She was not settling…When she sees something out of the ordinary, she just associates it with being bothered,” said Dreyer.

As a group of journalists tried to come close for pictures yesterday, Goose got agitated and ran around, showing signs of really being bothered by their presence.

At a weight of 800kg, vets tried to make a shoe for her to help her foot heal but it would wear out quickly.

“Ideally the vets would want something that lasts six to eight weeks but we have not found something that she doesn’t destroy. Her treatments are as quick as she needs them. She also lets you know [when she is not okay]. She starts to limp, she stops eating and we know it is time to change the dressings,” said Dreyer

After 10 months, the sole of Goose’s foot has started to grow back, so have her toe nails.