It's an Anniversary , thanks my honey for the surprise I could get used to it...#LoveT💗 🇩🇪 #southafrica🇿🇦

Popular model Mirriam Ngomani was left with a broken leg after an alleged racist attack at Time Square in Menlyn, Pretoria, in the early hours of Thursday morning.

“I asked what he was doing and he said ‘what is wrong with you? You’re dating a monkey’, Zehetleitner said, adding that the man was pointing at his fiancée.

“I asked what he was doing and he said ‘what is wrong with you? You’re dating a monkey"

He said the man’s friend pulled him away from the couple. They later met as they were walking out of the casino and the same man started insulting Ngomani, calling her the k-word and a monkey.

“I walked up to him and tried to reprimand him. I was calm and told him to stop calling her names. He punched me in the face and I retaliated. Four of his friends then joined in and started beating me up. The others pulled Mirriam down and started kicking her,” he said.

Zehetleitner said he passed out but remembers seeing her lying helplessly on the ground. He was left with injuries on the head and face.

He said he was pained that people at the scene just watched as they were being attacked and no one came to their rescue.

Please note that this article initially stated that model Mirriam Ngomani had sustained two broken legs from the attack, however it has been confirmed that only her left leg was broken. She also suffered bruises to her body 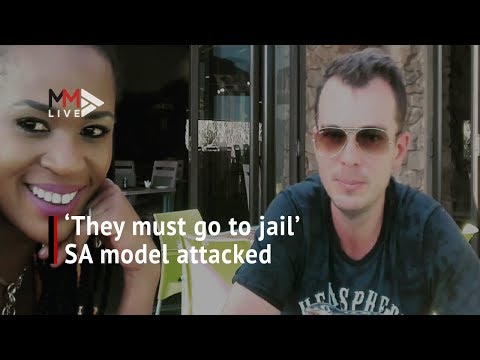