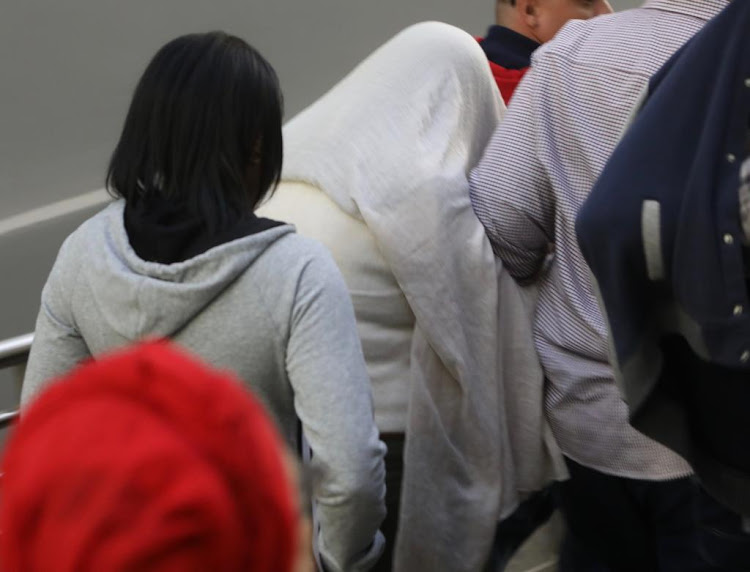 The mother of the baby that was rescued from a storm-water drain in Newlands leaves the Ntuzuma court under a veil and flanked by family on Monday.
Image: Jackie Clausen

Tears filled the eyes of the Newlands woman accused of dumping her baby in a storm-water drain, as the court granted her supervised visitation of the child.

The 32-year-old appeared anxious as she clutched a string of beads in her hands while she stood in the dock at the Ntuzuma Magistrate's Court on Monday. Her lawyer Jacques Botha told the court that the woman desperately wanted to see the child, who is now five months old.

"My client is desperate to see the child who is the subject of this charge," said Botha.

The woman, who can not be named or photographed due the sensitive nature of the case, was charged with attempted murder. This followed a dramatic four-hour rescue of the newborn baby in February after she was dumped in a storm-water drain.

Mother of stormwater drain baby back in court

The case against a Durban woman accused of dumping her newborn baby down a stormwater drain is set to resume at the Ntuzuma Magistrate’s Court on ...
News
3 years ago

The baby, named Sibanisethu by community members, is currently being kept in a place of safety. The woman is to see the baby under social workers' supervision.

During her last appearance her bail conditions were relaxed allowing her to see her two biological children - a 15-year-old son and nine-year-old daughter ahead of the Easter holidays.

The man who is believed to be the father of the baby was also present in court. The man, who cannot be named to protect the identity of the baby, told TimesLIVE previously that despite his extra-marital affair with the mother of the baby, he and his wife were eager to give her a permanent home.

He was awaiting the results of a DNA test before he can formally stake a claim to the baby.

Outside court, the two families avoided each other.

"I don't want to see them, look how they are all jolly jolly," the man told TimesLIVE.

The matter will be back in court on July 30.