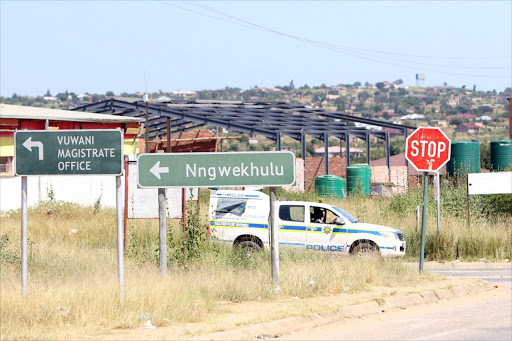 There was no voting disruptions in Vuwani, Limpopo
Image: Antonio Muchave

Fears that voting would not take place in Vuwani, one of the hotspots of violence in Limpopo, were quashed when scores of people turned up to cast their ballots in the troubled area in Venda yesterday.

As early as 7am when polling stations opened, locals could be seen walking towards schools eager to vote. This in spite of earlier calls by the Pro-Makhado Task Team for a boycott of the polls

Police kept a strong presence in the area as tension heightened after the arrest of a man believed to be deputy chairperson of the Pro-Makhado Task Team, Arnold Mulaudzi.

Police spokesperson Brig Motlafela Mojapelo did not want to say whether the arrested person was indeed Mulaudzi, saying the suspect could not be identified until he appeared in court.

The threat of boycotting the election did not deter Vuwani elders like Munzhedzi Mbedzi, 84. Using her crutches, she trudged on to a polling station at Ratshikwekwete Secondary School in Tshitungulwane.

She injured her right leg after falling ahead of Easter holidays. When special voting for people with special needs like her took place on Monday and Tuesday, Mbedzi was away for medical attention.

Ever wondered what happens after you cast your vote? Where do they go? How are they are captured? We have all of the answers for you right here!

"I had gone to Tshilidzini Hospital for my check-up on Saturday. I then decided to stay at one of my relatives' home. I only came back yesterday (Tuesday) hoping to vote [as a special needs voter]. But due to the shutdown, I could not vote," she said.

She woke up early in the morning to prepare for her arduous walk to the voting station. With issues around basic service delivery such as water and housing prevalent in the area, she said she was hoping for a change.

"I have been voting for as long as I can remember, and I am tired of living in unbearable conditions. Some of my rondavels collapsed as the years progressed. I then managed to build some rooms in my yard," Mbedzi said.

"I want the government to build a house for me because I currently live in a dilapidated one. Having a toilet in my yard would also be helpful because of the current state I'm in. - Mukurukuru Media

The Electoral Commission of SA said five voting stations had not been opened for voting as a result of ongoing community unrest in the Eastern Cape ...
News
2 years ago

About 1% of polling stations face disruptions on voting day - ISS

As the country prepares to vote on Wednesday, the Institute of Security Studies (ISS) says about 1% of disruptions can be expected at polling ...
News
2 years ago
Next Article