Ramaphosa praises local heroes amid heartbreak and death in KZN 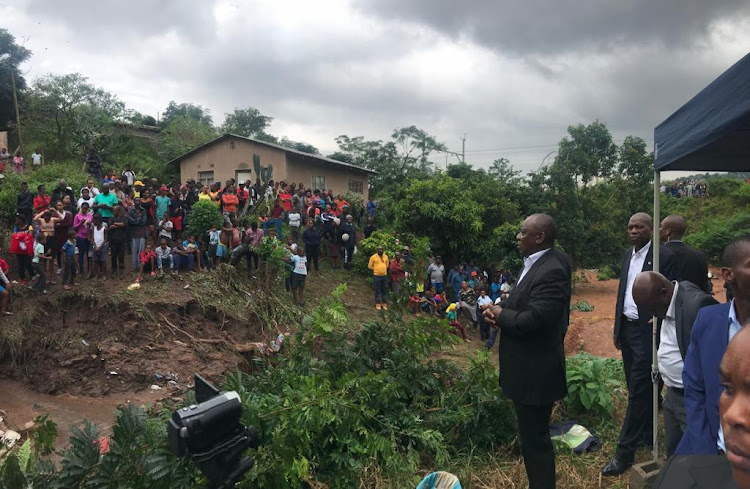 It's been a day filled with sorrow as President Cyril Ramaphosa consoled several communities and families who lost their homes and loved ones in the recent floods.

Ramaphosa was in Egypt for a conference on Sudan and Libya when he cut his trip short to visit communities ravaged by torrential downpours in KwaZulu-Natal, the Eastern Cape and the Free State.

Accompanied by an entourage of ministers and MECs, Ramaphosa made his way through areas affected by flash floods, mudslides and sinkholes, which have claimed more than 50 lives in KZN and displaced thousands of people.

He began his morning in Amanzimtoti, south of Durban, where he met two families whose homes were destroyed when a portion of Rockview Road caved in.

President Cyril Ramaphosa has flown to KwaZulu-Natal on his return from Egypt to assess flood damage and review the rescue operations underway in the ...
News
3 years ago

The president commended the public for pulling together in trying times. "There have been outstanding rescues and lifesaving feats by many people, who jumped into the mud, who jumped into flowing water to save their children, their loved ones and other friends and neighbours," he said. "We commend our people for taking risky actions the way that they did."

Following a stop in Umlazi, where 10-year-old Mnotho Mlotshwa died after his home was swept away in a flash flood, Ramaphosa made his way to Westcliff in Chatsworth, where he met the relatives of a family of eight who died when their home was destroyed by a mudslide near Westcliff Secondary School.

The president reacted with shock at the sight of the home buried under thick mud on a steep embankment. He comforted the family and ensured them that the government "would be walking this dark journey" with them.

"As president, as well as on behalf of the government, we pass on our condolences to those who lost so many people in one go. We want to say: our hearts are with you. We are here to support the family and any others who have sought refuge here in the local church," he said.

"We want to thank the community, who were the real rescue heroes here. In a moment of great need, you were able to come to the rescue. This is the sort of solidarity we want to see among our people. You have given them shelter, food and places to sleep."

Ramaphosa then proceeded to Burlington, near Chatsworth, where more than 300 families have been displaced.

His last stop was in Mariannhill, west of Durban, where the search for a 60-year-old mother is ongoing. He met members of Durban Search and Rescue (SAR) and was briefed on the situation.

SAR members on the scene said they had been inundated with rescues and recoveries since Tuesday. One told SowetanLIVE that they had been searching for the missing woman since 6am.

The president is expected to leave for the Eastern Cape, where hundreds of people had to be evacuated from areas in and around Port St Johns.

One of the worst floods in recent history has claimed more than 50 lives in KwaZulu-Natal and the devastation is widespread across the province. President Cyril Ramaphosa visited affected families to assess the damage.