Two arrested for fraud in connection with Lukau's coffin 'resurrection' 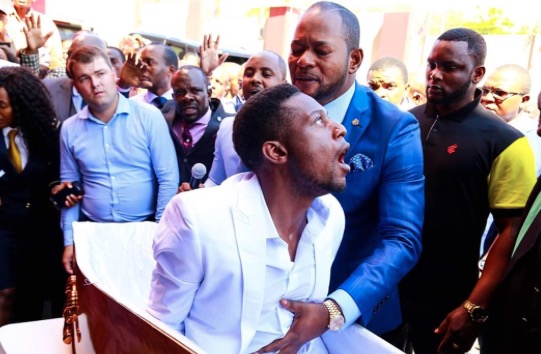 Two people have been arrested in connection with the hoax resurrection video flighted in February by pastor Alph Lukau's Alleluia Ministries International.

"They are in custody. They will be appearing in the Johannesburg Magistrate's Court (soon) to apply for bail," she said.

Police spokesperson Capt Mavela Masondo said in March that SAPS was investigating three cases of fraud opened in connection with the "resurrection" incident.

Brighton “Elliot” Moyo - on the run after being exposed as the lead character in a "resurrection" drama involving a self-procaimed prophet - ...
News
3 years ago

Mboro had staged a protest at Lukau's offices for "bringing Christianity into disrepute" and opened a case at the Sandton police station.

Brighton Moyo, the man falsely "brought back to life", has meanwhile died of pneumonia in his home country of Zimbabwe, TimesLIVE reported this week. There he was known as Thabiso Mlanje, 28.

Moyo, who according to his family had been in SA since 2011, had been employed by a customised door manufacturing company prior to going missing after the "resurrection" hoax.

The church had denied knowing in advance that it was a "fake miracle".

"At no stage did pastor Alph claim that he resurrected the person shown in the video, who was identified to him as Elliot. From the video footage, it is clearly stated that when the mortuary vehicle arrived at the church premises, there was already movement in the coffin. Prior to even praying for Elliot, pastor Alph states that Elliot is in fact breathing," said the church in statement issued at the time the scandal first broke.

Pastor Alph Lukau’s Alleluia International Ministries will pay you R3,500 to pretend you are cripple during one of his church services.
News
3 years ago
Next Article