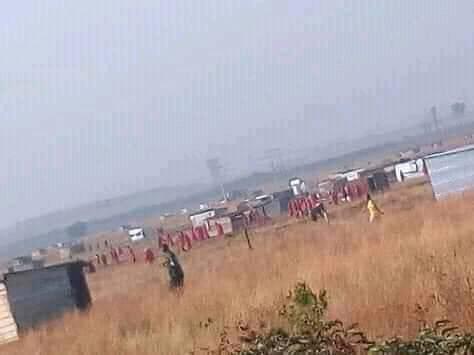 The eviction of illegal land occupiers from a Vaal plot turned violent on April 10 2019.
Image: @crimeairnetwork via Twitter

An attempt to evict illegal squatters resulted in violent protest on Wednesday at Rus Ter Vaal in Vereeniging.

Two people have been confirmed dead, according to SAPS spokesperson Captain Mavela Masondo.

Three others have been taken to hospital.

A member of the Red Ants, a security agency which is called in to handle evictions, is one of the people killed, according to the Crime Air Network.

Masondo said the Red Ants and the Sheriff of the Court were acting on a court order to remove shacks which were illegally erected.

“It is alleged, as the Red Ants were demolishing the shacks, a fight broke out with members of the community,” he said.

Murder and attempted murder cases have been opened.

Hundreds of protesters bring traffic to a standstill in central Durban

Protest action has broken out in Umgeni Road outside the Durban CBD on Tuesday.
News
3 years ago

Alex protesters get support from the public as they march in Sandton.
News
3 years ago

This is the current situation in Rust-Ter-Vaal and they set the ANC ward councilor's house on fire. They over powered the Red ants, where is SAPS now??? pic.twitter.com/Vc5F3EWK2t