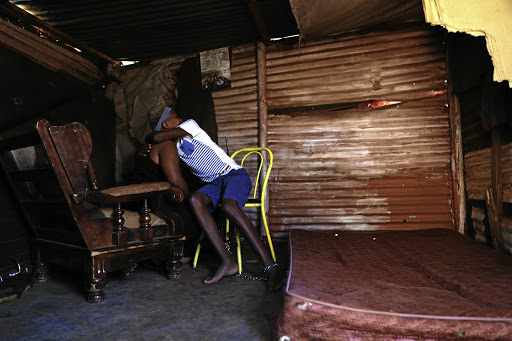 Phumzile Vilakazi lives with the constant shame of having to chain her autistic son to a chair and lock him up inside a shack because she fears he might get hurt or endanger people around him.

Vilakazi, of Orange Farm, south of Johannesburg, shed tears when talking about her desperate situation yesterday.

She told Sowetan that out of desperation she has resorted to restricting her 18-year-old son's movements because he was violent. She said he has been turned away from facilities that assist people with disabilities.

Vilakazi said Mxolisi, who was diagnosed with autism at the age of seven, grew aggressive in recent years and has assaulted relatives and neighbours.

"I'm afraid that his life will be in danger because people don't understand his condition and think he is doing this intentionally. My worst fear is that one day I will get a call saying that my child has been killed," Vilakazi said.

Autism spectrum disorder results in difficulty in communicating or socialising. Autistic people can be extremely gifted or have severe mental impairment.

When Sowetan arrived at the family's home yesterday, the teenager was sitting in the lounge with his ankles chained to a chair with padlocks.

Vilakazi said Mxolisi had assaulted his grandmother, broke windows around the house while some residents in the area had complained about being assaulted by him. She said he sometimes runs out of the yard and into the road were he could get hit by cars.

Mxolisi said during the day her mother locks him up inside the shack in the yard because she is afraid of him.

Vilakazi also showed Sowetan medical records and a list of up to 30 facilities that she had approached for help.

"The moment I mention that my son has autism, they turn me down. It breaks my heart to chain my son up like this but I don't know what else to do," she said.

Vilakazi said people in the area rejected her son.

"People think my son is a monster. They lock their gates when they see him," she said.

A local school had agreed to admit him about two weeks ago but he was kicked out within three days, Vilakazi said.

"They called me in for a meeting and told me that they can't handle him," she said.

Vilakazi said the irony of her situation was that she works for an NGO as an advocate for people living with disabilities but she was struggling to help her own child.

"I feel like the system is failing us. Today we speak about human rights but our children have no rights. They are excluded," she said.

The teenager's grandmother, Lindiwe Zondo, said the family was in desperate need of help.

"People think we are abusing him by locking him up but there is nothing else we can do," Zondo said.

Autism South Africa director Sandy Usswald said it was common for families to resort to such measures because facilities were not willing to take in children with extreme behavioural problems.

"I understand their frustration. They are left with no other choice. If there's any kind of strange behaviour, especially with an autistic child, places of safety refuse to take them. This is why families resort to such measures," Usswald said.

She said her organisation would intervene and assist Vilakazi.

The spokesperson for the provincial department of social development Thebe Mohatle said it was disturbing that the family had to chain their child up. Mohatle said the department will assign social workers to investigate the case and make referrals to specialists.