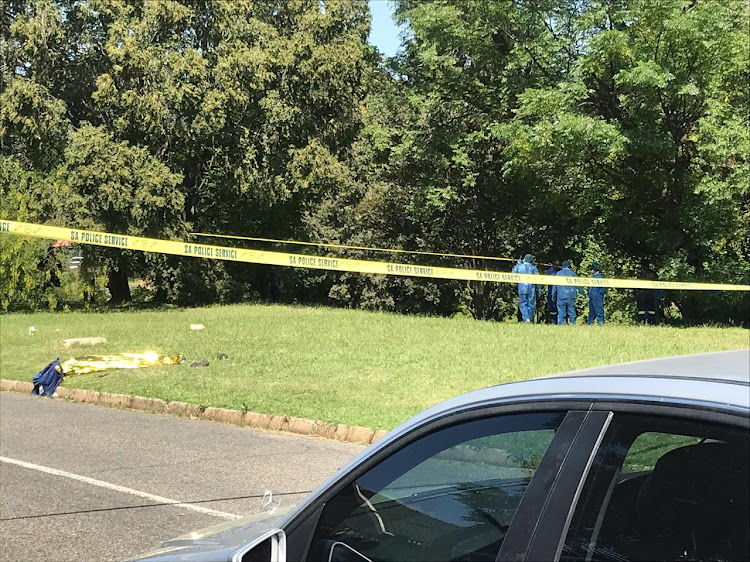 A forensic team looks for clues at the spot where Grade 11 pupil Kulani Mathebula was fatally stabbed.
Image: Naledi Shange

Three teenagers implicated in the death of a Mondeor High School pupil are due to appear behind closed doors in the Johannesburg Magistrate's Court on Friday, as a memorial service gets under way for Kulani Mathebula.

Mathebula, a 19-year-old Grade 11 pupil, died after being stabbed while walking from his home in Mondeor, south of Johannesburg, to school on Wednesday.

Preliminary investigations have revealed that his cellphone may have been taken during the attack.

The three suspects, one aged 13 and the others 15, were arrested just hours after the killing.

CCTV footage taken from various cameras in the vicinity placed people at the scene of the crime.

The 13-year-old suspect made a brief appearance before the juvenile court on Thursday, where his case was postponed to Friday.

"This is to allow the boy to be assessed by a probation officer and the probation officer will then compile a report that will be presented to the court so that a process of conducting a preliminary inquiry can be kickstarted," said National Prosecuting Authority spokesperson Phindi Mjonondwane

"That process, as per prescripts of the Child Justice Act, should be conducted within 48 hours of the child's arrest," Mjonondwane said.

A memorial service is being held for Mathebula at the Mondeor High School hall. He is expected to be laid to rest at Malamulele in Limpopo at the weekend.

Police on Thursday said they had arrested two more people believed to be behind the killing of Mondeor High School pupil Kulani Mathebula.
News
3 years ago

A 16-year-old boy was killed outside the Mondeor High School in the south of Johannesburg on Wednesday, paramedics said.
News
3 years ago
Next Article