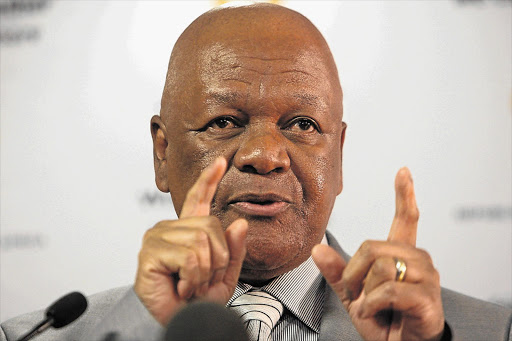 Energy minister Jeff Radebe has thanked everyone who was concerned about his recent health scare.
Image: File / SYDNEY SESHIBEDI

Energy minister Jeff Radebe on Thursday moved to reassure the nation that he was fine, as he revealed that it was the resurfacing of a murder during the ANC anti-apartheid struggle which contributed to his health scare this week.

In a tweet on Wednesday night, Radebe said: "Following the exhumation of the mortal remains of Ben Langa and his reburial in KwaZulu-Natal yesterday, the whole process took a toll on my health and I could not attend to various public engagements.

"I have recovered now and would like to thank everyone who was concerned about my health," Radebe said.

Following the exhumation of the mortal remains of Ben Langa & his reburial in KZN yerst, the whole process took a toll on my health & I could not attend to various public engagements. I have recovered now & will like to thank everyone who was concerned about my health @GCISMedia

Ben Langa was the brother of the late chief justice Pius Langa. He was an ANC and UDF activist who was killed in 1984 by two ANC comrades who later told a court that they had acted on instructions from their commanders in Swaziland, following rumours that he was an apartheid police informant. The "informant's" information, however, later turned out to be untrue.

The ANC has in the past apologised to the Langa family for Ben's assassination.

During their time in exile, the ANC ran a feared counter-intelligence and security wing called Imbokodo.

Radebe's official CV states that he joined the underground structures of the ANC during the student uprisings of 1976. After serving his legal articles in Durban in 1976, he went into exile in Mozambique and Zambia where he served in various roles. He also underwent military training with the ANC's armed wing Umkhonto we Sizwe (MK) and served time on Robben Island.

Radebe said he would resume his ministerial duties on Thursday.

Energy Minister Jeff Radebe rushed to hospital due to ill-health

Energy Minister Jeff Radebe missed today’s parliamentary questions session after being rushed to the hospital due to ill-health.
News
3 years ago

We applaud billionaire and mining magnate Patrice Motsepe for finally breaking his silence over claims that his brothers-in-law, President Cyril ...
Opinion
3 years ago
Next Article