A Germiston family is in mourning after their three-year-old son was tormented and killed by children at a dumping site near the Marathon informal settlement in Germiston on Sunday.

The toddler's body was found in the bushes near the site on March 10 2019.

Two children aged seven and eight stand accused of killing the child. They allegedly confessed to police how they assaulted him with stones, tied him up with a rope and pushed him over the edge of the dumpsite.

The three-year-old was reported missing on Saturday after being given an afternoon meal. He reportedly left his bowl unattended and told his mother that he was playing outside.

He was found the next day. The wounds and blood on his body were still "fresh",  according to his father who rushed to the dumpsite after hearing rumours about a body being discovered there.

"I just rushed there. A lot of things were going through my mind. I had hoped it would not be him but unfortunately it was," he said.

His father suspected that there may have been a third hand in the mysterious killing.

"I understand the children could have been playing and a mistake happened, but a dead person is heavy. There is no way they would have been able to pick him up and put him inside a sack … something doesn’t add up. There is an adult involved somehow," he told TimesLIVE.

He could not think of anybody who might have wanted to harm him or his family. 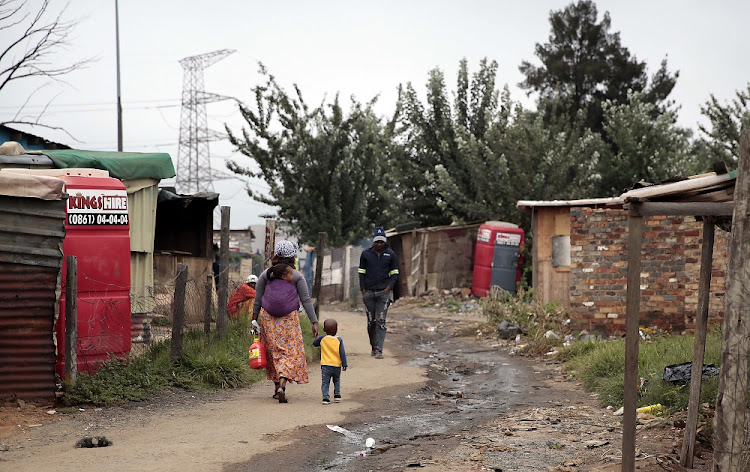 The community of Marathon informal settlement at Primrose, Germiston, is trying to come to terms with the horrific murder of a three-year-old boy by older kids.
Image: Sebabatso Mosamo/Sunday Times

"I don’t have enemies around. I wake up early in the morning and come back [from work] quite late. A lot of people don't even know me in this area. Even if I had wronged someone why did they have to kill my son and not me?" he asked in a trembling voice, covering his face with his hands.

Anele Nyawo, who is friends with the child's mother, said the community was reeling from shock over the incident.

"He was a very good boy. We last saw him playing with the other kids and eating chips … he liked playing like the other kids but he wouldn’t go far, he would not get lost. He was too clever," said Nyawo.

While the two children allegedly told police what had happened, the boy's father said their families had not made contact.

"As a parent when you hear that your child has done something, you go there even if you don't admit anything but just to acknowledge that you're aware and sorry," he said.

"Even if they were to come now, I have nothing to say to them … an apology will not bring my son back," he said.

The child's mother is not coping well. "She is traumatised but what can she do? She is just always crying," he said.

Police spokesperson Kay Makhubele said the incident was under investigation.

Delay in case of Witbank mom accused of killing her kids

The case against the 24-year-old woman from Klarinet in Witbank accused of killing her four children in December has been postponed.
News
3 years ago
Next Article