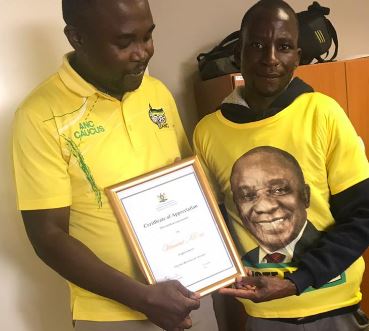 The ANC greater Johannesburg region moved swiftly to award Vincent Cosa a certificate of bravery on Monday. The party shared a picture of the hero dressed in an ANC election T-shirt.
Image: Twitter / @ANCJHB

Vincent Cosa, who was filmed risking his life to save a child paralysed by fear above the raging water of the Jukskei River, has been given a bravery award.

The ANC greater Johannesburg region awarded Cosa a certificate of bravery on Monday. The party shared a picture of a smiling Cosa, dressed in a bright yellow T-shirt with President Cyril Ramaphosa's face on it.

Cosa, a Mozambican national, told SowetanLive this week that hearing the heart-wrenching cries of 10-year-old Mpilo Ngubane had moved him to act.

His heroic act was captured on video, with many hailing him as a hero.

Mpilo was trying to cross the river by crawling across a water pipe. Cosa said he was on his way from helping out residents who recently lost their shacks in a fire when he heard a commotion near the bridge.

The heart-wrenching cries of a 10-year-old boy moved Vincent Cosa, 37, to risk his own life to deliver the distressed child to safety.
News
2 years ago

"I wanted to help when I saw that child trapped on the pipe. It was like seeing one of my own children in trouble. I could see that I was taking a big risk and that I could also die but I decided to do it anyway. God gave me strength and I saved him," he said.

Cosa said he could hear Mpilo crying loudly as he approached. A strong current was flowing below and Cosa had to move carefully on the slippery pipe. "When I got to him I held him and turned him to face the other direction. I instructed him to hold on to me and I started moving towards the grassy area," Cosa said.

He said people observing from the bridge cheered him on as many had been too afraid to help.

The father of four, who lives in a shack just downstream from the bridge, said he never expected to become a hero overnight. "I'm happy that I could save this child's life," he said.