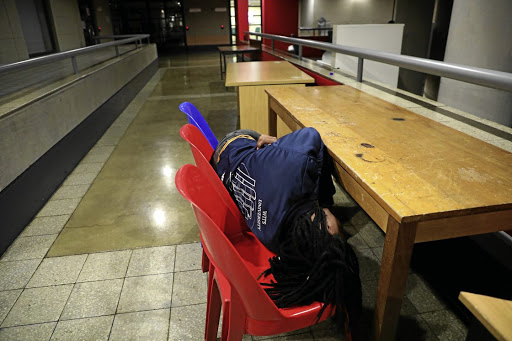 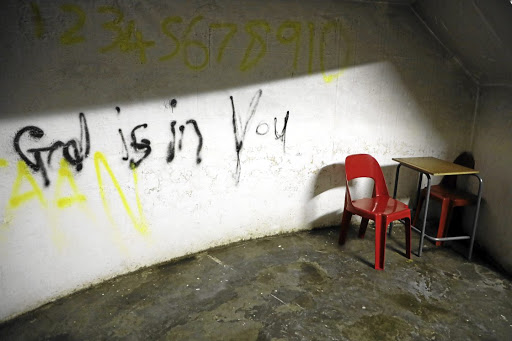 Scores of desperate Wits University students have been forced to sleep illegally in study halls, laboratories and in corridors on campus due to a shortage in accommodation.

When night falls on campus groups of students, some who lost their bursaries and those who are still waiting to be approved by the National Student Financial Aid Scheme, saunter on campus to find the best spot to sleep.

One such student is Tshepo* who huddled with his friends in a corner in one of the laboratories at Wits University.

He is one of at least 500 students who have been struggling to find accommodation since the start of the academic year, according to student leader Thato Sakong.

Tshepo and his friends have spent a month alternating their sleeping spots in different faculty laboratories and study halls. The 25-year-old third-year student in metallurgical engineering has made peace with the fact that he has nowhere to sleep.

Dressed in skinny jeans, slightly rolled up, and a T-shirt, Tshepo had a backpack with clothes he needed to change into the following day.

"Sleeping here is very safe for me as I don't have to worry about being mugged.

"I spend half the night studying or doing projects with my friends. It is only after midnight that I get to sleep, when everyone is gone," he said.

Tshepo lost his bursary last year after he failed some of the modules. He now uses earnings as a part-time online English tutor to pay for his fees and support his unemployed mother and siblings in Vuwani in Venda, Limpopo.

"Sleeping on a chair is a small price to pay to secure a better future for me and my family. Not having a place to stay used to bother me at first but I have to stay focused."

Tshepo has to wake up just before 5am every day to take a shower at the campus gym and prepare for his lectures.

Rapper AKA has donated R100,000 to the Wits University 2SRC humanitarian fund in solidarity with the students following recent protests. Hundreds ...
News
3 years ago

On the other side of the campus at another faculty, a group of engineering students were found sleeping on couches in the study hall, including a 25- year-old electrical engineering student from Ladysmith in KZN. He also lost his bursary after failing some modules.

The student, who did not want to be named for fear of victimisation, said he spends most of the evenings studying with a group of other desperate students. They all get to sleep after midnight.

During the day, the students said they relied on food handouts from humanitarian organisation Gift of the Givers.

"All I want is proper accommodation; I get really tired because I don't get enough sleep. This is a study hall and students are getting free Wi-Fi so I cannot just ask them to switch off the lights because I want to sleep. At times they leave after 2am and I only get two hours of sleep," he said.

According to Sakong, the students form part of a group of more than 500 who have been struggling with accommodation since the beginning of the year. She said they have assisted 200 students so far.

"We have residences like Witswaters and Esselen but the university refuses to open them for emergency accommodation and claim that the buildings are not owned by Wits," she said.

"We have provided urgent accommodation and food to hundreds of students requiring assistance in recent weeks," she said. "We have also increased the number of beds on our campus to 6,700 beds and we are working with the City of Johannesburg and the province to find a long-term solution to the problem."

Student leaders at different universities said the Wits situation is also mirrored at other institutions.

Lucky Nkambule, SRC president at Tshwane University of Technology Soshanguve campus, said the institution has 17,000 students and only 10% have accommodation.